FAMILY HISTORY (but via digressions)

I want very much to tell the blog more about my cousins Nick and Jim and will do so soon, and also, more about my Aunt Connie and her life in New York, much of it working for literary agents, Russell & Volkening. But first, I thought of something funny this morning and wanted to put it down on paper, or the illuminated world of the computer monitor.

My local supermarket has had a promotion going on for several months: one accumulates points by buying groceries, then you're allowed to choose from a variety of chef's knives and other implements. As I had arrived at the suitable number of points, I selected what looked exactly like one of the fine culinary instruments seen on the Food Network. Have had it for a month now but have not taken it out of its sheath. I seem to feel it is hazardous to use, however ridiculous this seems. And so several other things came to mind:

One is my favorite radio person of all time: Jean Shepherd. To go back to the Pratt Institute years, I'd been made to know about Shepherd by the abovementioned Aunt Connie, a person often awake late at night (and enjoying same), and I, a freshman student who commuted daily, Long Island to Brooklyn, also awake into the night, grappling with sophisticated art assignments and trying to fend off the dreaded spectre of flunking out. (There are/were several fellow students from that freshman year that I still remember as intelligent and nice people who were suddenly gone, and I determined, fiercely, to stay, hanging on by my fingernails.) In line with this, Bob and Ray on their radio program used to end each show by saying: "Write if you get work, and hang by your thumbs". So I am appending here a picture of me in those years which I'd sent to Connie, with the notation, "Hanging by my thumbs!" 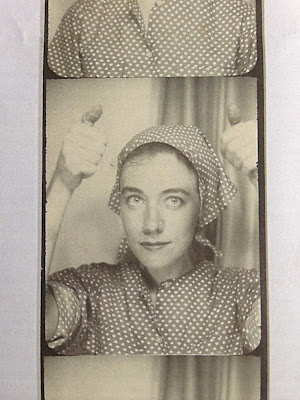 Digression itself was Jean Shepherd's trademark mode, a fact to which he referred frequently. I remember hearing the following story on his late-night radio program on WOR. It ran overnight in those years, he would often tell of driving in from New Jersey to do the show and going home in the morning. This particular story was about the "depression glass" given out in movie theatres in the 1930s, the weekly gift bringing out  bunches of appreciative movie-goers. Shepherd explained that every week, another piece of a large glassware set would be the featured item. After several weeks, a gravy boat was the gift. But the next week, again it was a gravy boat...and the week after that, again a gravy boat. The audience became furious and the management advised them that the following week, if they would just bring in all the excess gravy boats, they would be replaced with suitable items. When the next week came and the disappointing words were said, that there were no replacement items, a slew of gravy boats (in the transparent glass known as "depression glass", now prized by collectors) came hurtling at the screen. Shepherd called it a triumph of collective action and theatricality.

There are books of Shepherd's collected short stories:  A Fistful of Fig Newtons;  In God We Trust, All Others Pay Cash;  Wanda Hickey's Night of Golden Memories and Other Disasters; and The Ferrari in the Bedroom, all published by Broadway Books. Reading them brings back details I still remember hearing on the radio back then, such as the 4th of July that his father's silk pongee shirt had an altercation with fireworks! I like the following quote in the front of the Fig Newtons book: "Only the centipede recognizes the five thousand footsteps of his grandfather..." - Banacek

There are also audio books, the actual radio programs, many of which I must have heard in those anxiety-ridden days striving to keep afloat at Pratt. Shepherd's audio books are produced by "Radio Again" and can be found at:   www.RadioAgain.com

To go back to the the chef's knives, they reminded me of the depression glass giveaway, but now a further analogy: a story of James Thurber's which appeared in the book, My Life and Hard Times.

A quote from the book:

"My mother, for instance, thought - or, rather knew - that it was dangerous to drive an automobile without gasoline: it fried the valves, or something. 'Now don't you dare drive all over town without gasoline!' she would say to us when we started off. Gasoline, oil and water were much the same to her, a fact that made her life both confusing and perilous."

My hesitation about the the undoubtedly excellent chef's knife may make me a kindred spirit with Mrs. Thurber.

You can read the wonderful My Life and Hard Times via this link: