This is a story about people whose innovations have to do with walking on the earth with optimum comfort and ease. The first such person I would like to tell about is Milton Feher, but there are others as well: Sophia Delza, Pauline Tish, Patricia Norris and Harold Pessirilo. I want to write about these folks in future posts, and also to quote something interesting and pertinent from C. G. Jung's introduction to the I Ching, a book which I love.

I first came to know Milton in 1962 when my left knee developed arthritis in an almost-overnight fashion. I had been taking a course at what in those years was a well-known business school in New York City: Speedwriting Institute on West 42nd Street, next to a popular store in those years, Stern's, right across from Bryant Park. Though I had graduated from an excellent art school, Pratt Institute, I was still in a dreamy state about what my vocation should be apropos of art: I wanted to paint, I wanted to write, and I wanted some employment, but the first two options didn't meet logically with the third. As I was not too practical in those years (something still to be worked on), I acquiesced quickly when my father suggested that I learn to type (and in my case, learn Speedwriting, a form of shorthand which uses the alphabet as opposed to symbols. My aunt Connie used to marvel at the ads on the subways in those years: "if u kn red ths".) My parents lived through the Depression, both holding jobs which were stable but many of their friends and siblings struggled to find and hold onto jobs. So I learned to type fast (the touch system) and to take dictation, which was how much of the business world progressed in the pre-computer world.  And as it happens, I still use my Speedwriting and recently found it marvelously helpful in doing a series of transcriptions for two PBS science series: "Brains on Trial" and "The Human Spark."

I started the Speedwriting course in the fall of 1961 following my graduation from Pratt, in what was to be an exceedingly cold winter in New York. The day the arthritis began was really bitter, and as I exited down the very long staircase at the school to head to Penn Station, I felt as though something had wrapped around my knee and was tightening on it nastily. When I got down to street level, I found there was nothing there around my knee causing the pain, and I made my way home with difficulty, thinking the pain was due to the intense cold outside. The next day, I visited my doctor, he did an X-ray, diagnosed arthritis, and gave me a cortisone shot in the knee. And after a short leave of absence from the school, I  decided to read up on rehabilitating a sore joint, finding in the phone book a unique listing under the categories of schools of dance: the Milton Feher School of Dance and Relaxation. It sounded wonderful, and then it actually was!

Milton was a very unusual teacher, not simply from the dancing standpoint, but he had evolved a unique way of overcoming his own arthritis which made his classes so special. Following are excerpts from his own writing and articles about him. I continued (with benefit to my knees) until I married and moved to Westchester, and returned to the classes when I moved back to New York with my two daughters, finding great benefit again, not only physical improvement but much that made sense to me in other realms. Eventually I began to write things in response to expressions Milton used to get people to free their bodies from stress and its resultant strain on the posture, the kind of posture he felt was everyone's birthright. He was pleased with the first poem-of-sorts I gave him, asked me to read it to the class, and I wrote more, reflecting back to him the words and freeing phrases he would say as we moved about the room.


Here is the first of the poetry-inclined writings... 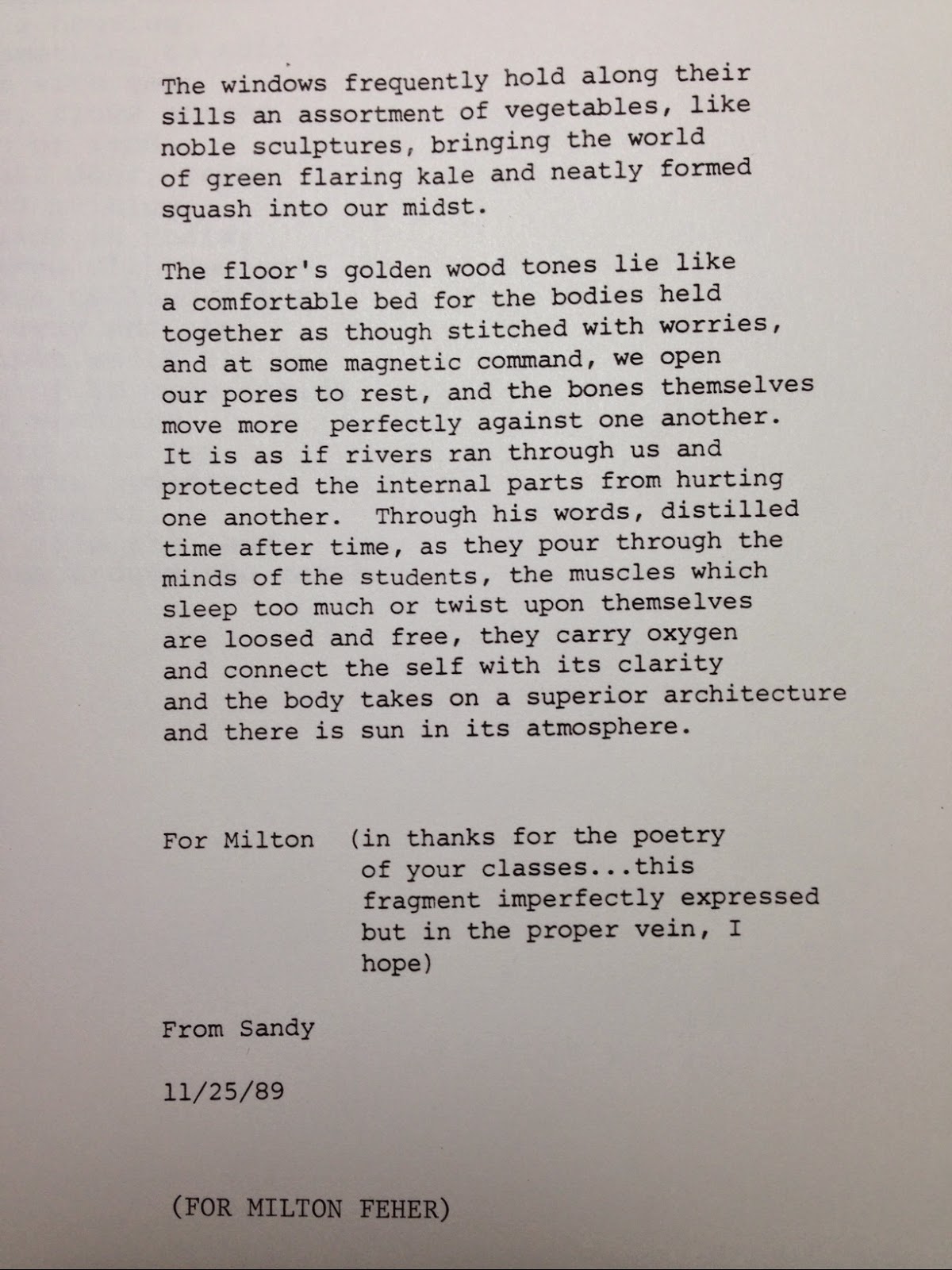 Milton wrote an article for Prevention Magazine in 1958 which he later issued in a booklet:  "The Art of Walking: Walk Correctly for health, voice, sports, and figure". In it, he explains he'd been a dancer who'd developed arthritis in his knees, leading him to find his own unique solution to the problem. He was told by an orthopedist that the cartilage in the knees had been destroyed by excessive jumping, and that he would never be able to dance again. 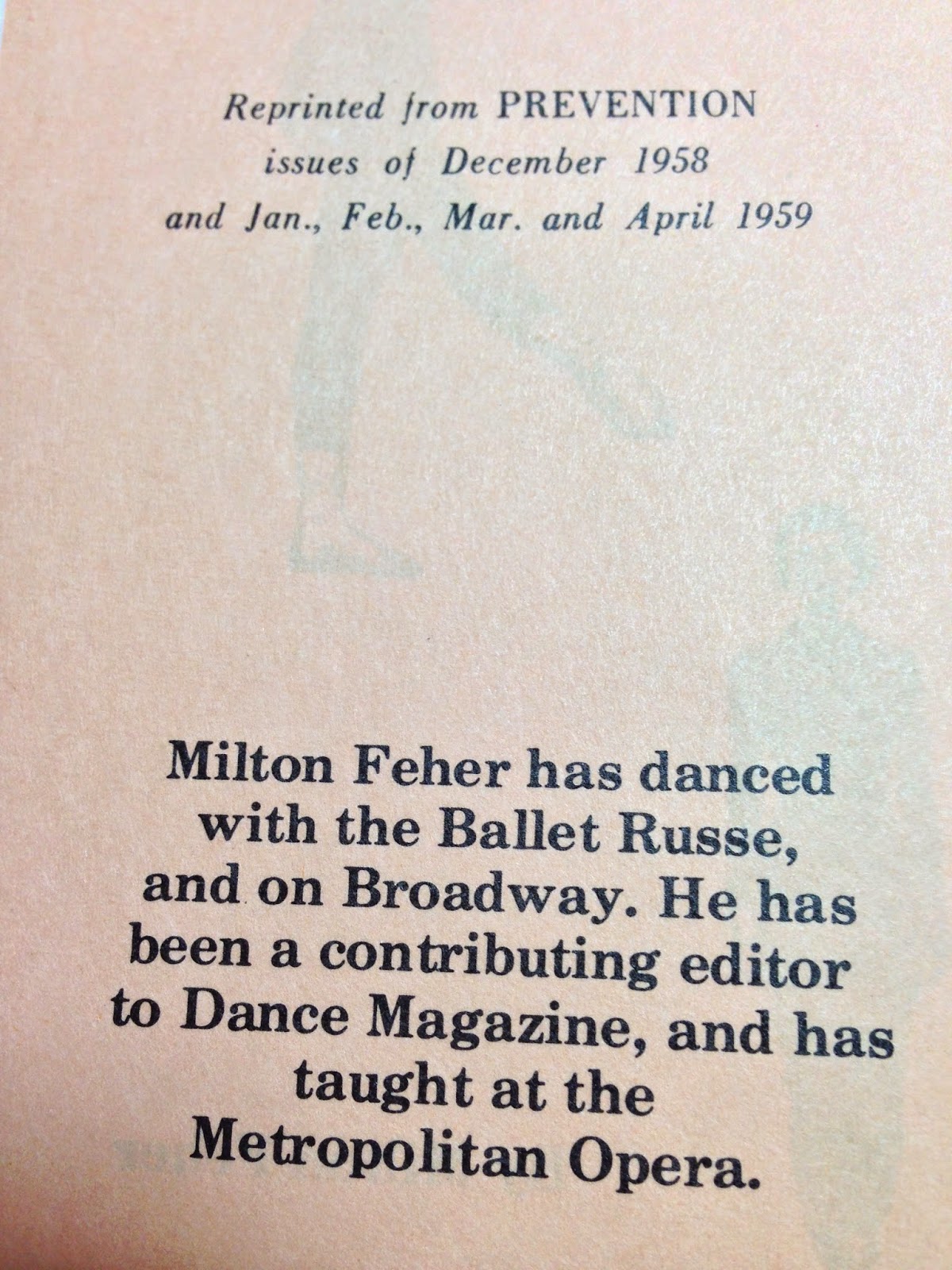 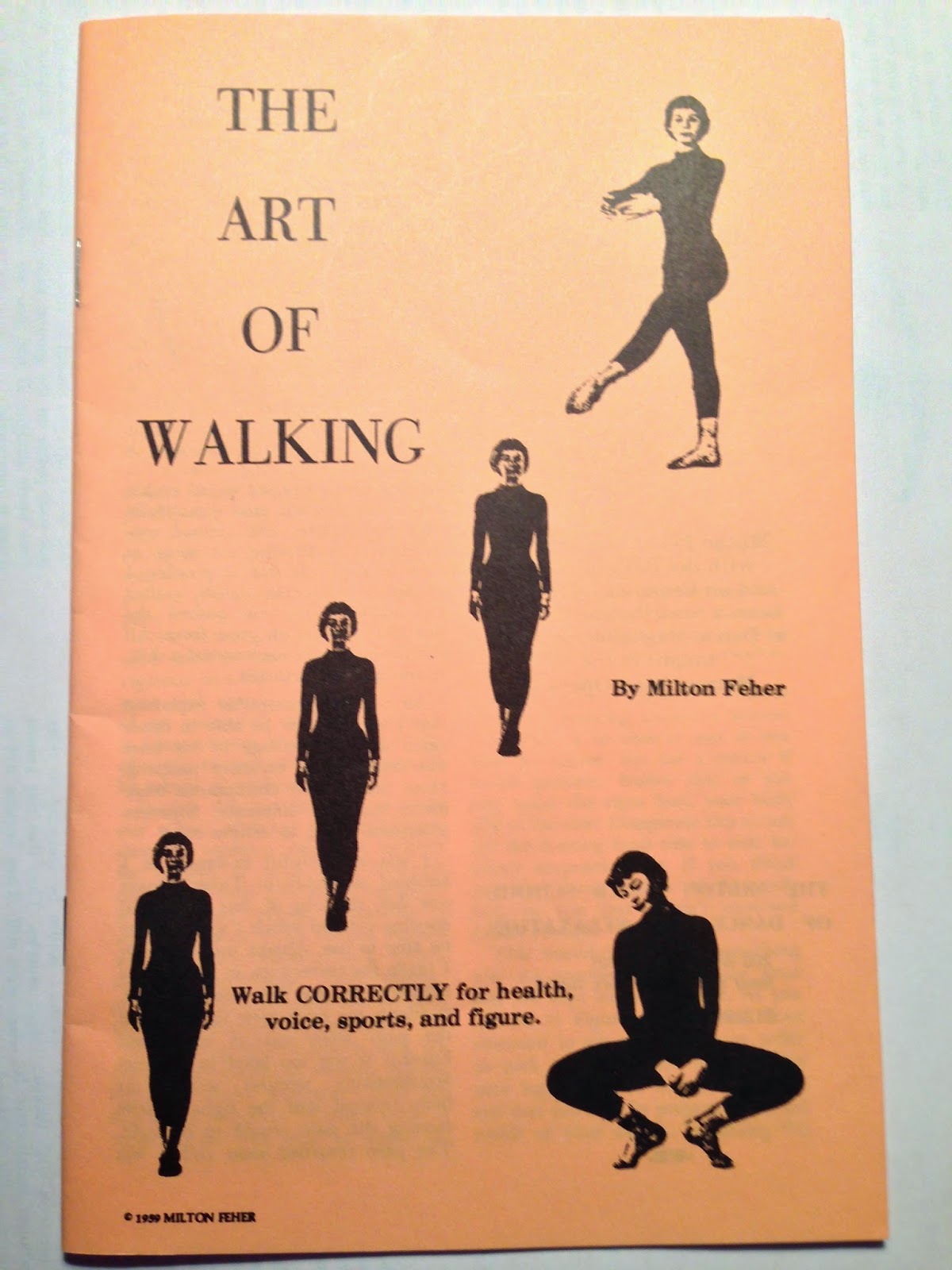 From the booklet:  "I was a sorrowful ex-dancer as I hobbled miserably in Times Square one day, thinking of that wonderful dancing method which I would never be able to use. Almost unconsciously I made the corrections in my posture necessary to get the spine straight. Suddenly my body grew light and all the pain went out of my knees. Eureka! It was too good to be true! Straightening without strain, my body relaxed and the tight muscles causing the pain ceased to be tight. The pain returned soon and it was several years before it went away permanently. During this time I had tens of thousands of experiences indicating that effortless straight posture relieved my pain while my usual posture or a stiff erect posture caused pain."

"The outstanding fault in walking is tipping the head and trunk from side to side. We all know that the shortest distance between two points is a straight line. If you tip from side to side while you are advancing from one point to another, you are walking two miles for every one you progress. The sideways motion helps drag the legs forward, but robs the legs of a part of their proper function. Legs which do not work completely gradually stiffen up so that they can help you even less. This forces you to use the trunk more and more as time goes by. In most cases, the older you are and/or the weaker you are, the more you heave from side to side."

(The booklet is illustrated with drawings showing the body "resting on your feet which are directly beneath you."   And there are several photos of Milton that exemplify his resting posture.) 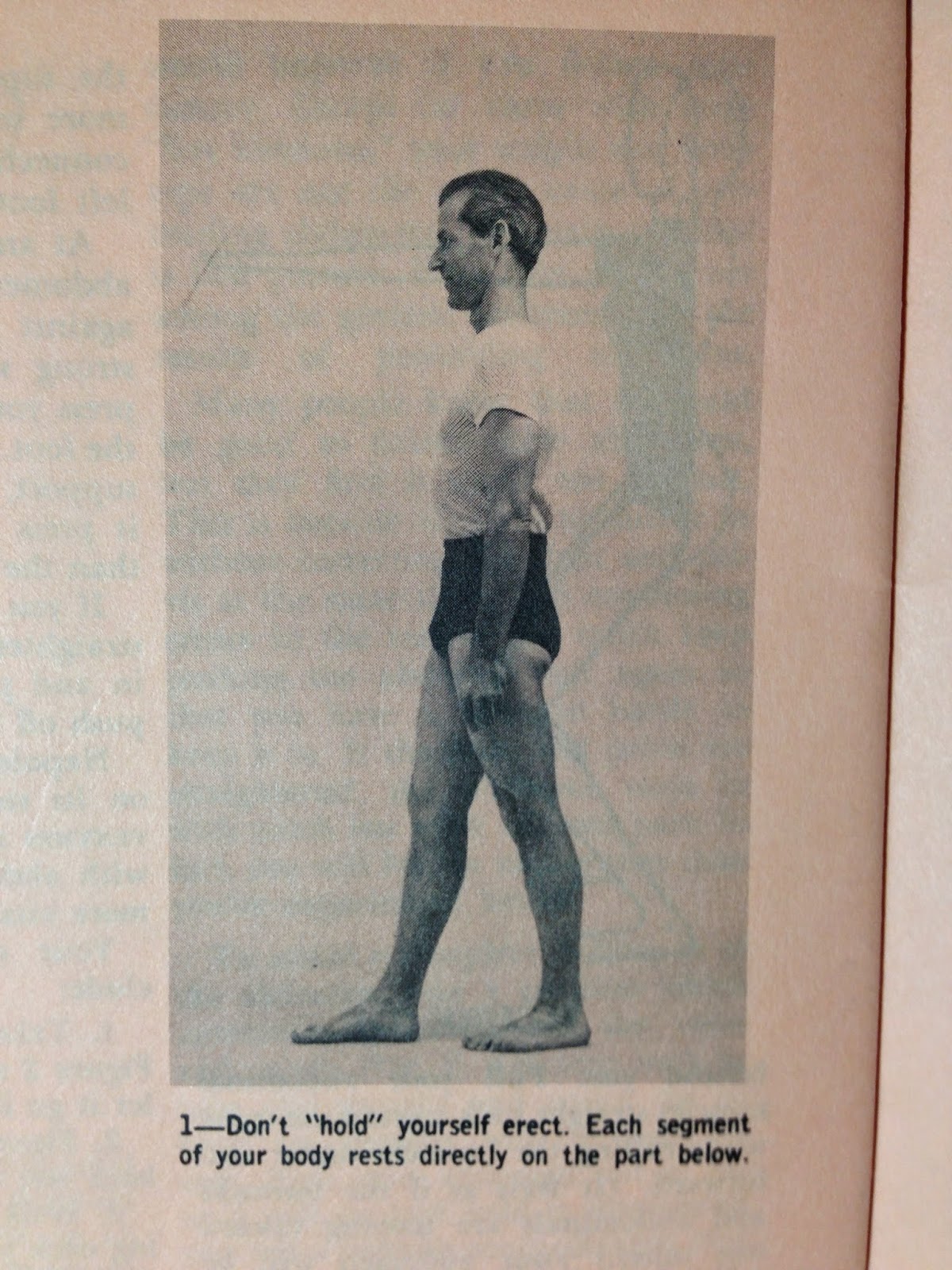 WITH age comes stiffness. It is one of the givens of life.
So when we encounter a 75-year-old man who is as limber as the proverbial wet noodle, that's reason enough to pay attention. When he glides about his studio with the ease of a gazelle and stands interminably on one leg in a storklike pose, we listen to his words with rapt concentration. Never mind that his theories at times seem to cross the line from physiological fact into a charming, convincing ether, the metaphysics of a half-century of experience.
With age comes wisdom, and we youngsters would do well to listen and learn.
Milton Feher, dance instructor, stretching expert, balance coach, posture guru, relaxation proponent, has a current and longtime student who is 96. She also glides effortlessly about the studio, belying her age.
Our subject, then, is posture, which our mothers nagged us about. Feher considers posture, or balance, the foundation of all that he teaches and believes. Great athletes begin with posture. Posture can improve a runner's gait and speed. Feher lunged across the studio floor to demonstrate a point.
''When your body is balanced, your mind is balanced,'' he said...
(To read the rest of this article, you can go to the New York Times archives, and enter the title: "Posture and Fitness Linked in Feher Method". One quote from it particularly sums up Milton's point of view, expressed in every class and everything he wrote or said:  "The more you press against the earth and it supports you, the more relaxed you become," he said. "Relaxation is everything. When you relax, you function better.")

The Walking Magazine, 1986:
An article titled "Feher and Cool" had Milton saying: "The body, if released from tension, will straighten--that's a part of good alignment."

New York Magazine, May 28, 1990:
Author Patricia Burstein said: "Feher leads his pupils through a three-part routine that begins with a mantra: 'Let your arms rest. Let your head and trunk sink down. Let your legs relax.' Melodic notes, instead of rock music pounding the brain, issue from a piano played by Russian emigre Fima Farberg as the group sways into rhythmic dance exercises."

There is a recording of Milton speaking and taking the listener through his methods of relaxation: "Relaxing Body and Mind", which was produced by Smithsonian Folkways in 1962.
It can still be ordered from them online (Smithsonian Folkways, Catalog No. FW-06191.) It was originally an LP, but is now available on CD for $16.98. The several sections from the CD can also be found via digital download under their headings: Walking without Effort, Effortless Good Posture, Going to Sleep, Breathing without Effort, Relaxing Body and Mind, The Habit of Relaxing, and How to Sit Correctly. A drawing I'd done at one of the classes...Milton was a fatherly figure to all his students...this must have been around 1990, and the two he is pictured with were Annette on the left, and Ursula on the right 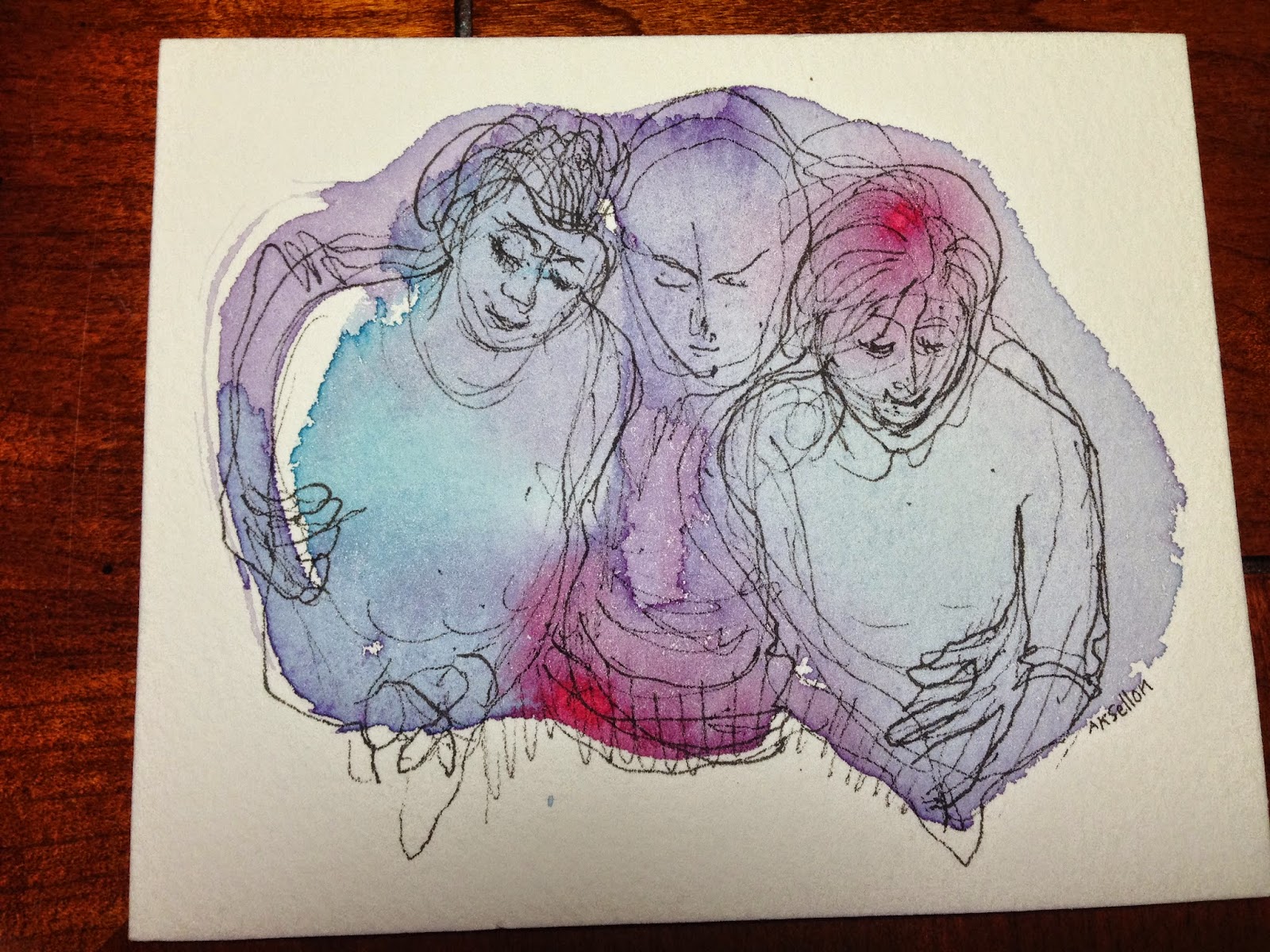 And several more things I'd written for Milton...

The mind and what it is
was the question asked.
We sat on the floor like
crickets, with our bent
legs, and antennae poised.
I made myself not think
and an image of whiteness,
like stretched walls of a
tent, came to mind. I
felt the boards of the floor
were white too and stretched
far away and that what
was called the mind, the
alertness, was a bouncing
back and forth from the
farthest horizon and the
upright body that was me
with my small brain coiled
at the top like a fern-head.

We stand on the point where the foot meets the earth

a river of restfulness flows upward from foot’s
contact with ground, the body poised and lightly straight
as a feather

I have more information to impart about Milton and his wife Marga, who worked with him for years. In one of the last classes I attended, a visitor came to the class, an old friend of Milton's who with him,  appeared at the 1939 Worlds' Fair in Queens as part of a ballet contingent in a production called "Railroads on Parade", music by Kurt Weill, written by Edward Hungerford, and sponsored by all the country's many railroads.  I  have some information to post about this unique event. Milton told us of "dancing" on bicycles as part of the World's Fair performances. And it so happens that my mother and father, Dorothy and Leighton, were at that very Fair the day before I was born, walking and enjoying all, maybe even having seen Milton on the stage that day. In later years, my mother and sister Cynthia began coming in to New York for his classes...Mom would have been in her 80s at the time, like so many of his students.

Here is one of Milton's repeated and inspiring utterances: (among many other similar wordy inventions):     " Let your head rest upon your toes, let your neck rest upon your heels"...
this said as we walked around and around the room in a circle, the way every class ended...
you can try saying it to yourself when you take a walk...the words keeping time with your feet.