Irene Kittle Kamp was born in 1910, and became a writer at the age of 18, when she graduated from high school during the Depression. My mother, her eventual sister-in-law, had great admiration for Renie for her resourcefulness at such a young age. My father, the oldest sibling of five, and Renie and her three sisters, lost their mother, Irene Rutan Kittle, to kidney failure at the age of 43. My father was 21 when it happened, about to marry my mother. The youngest of the sisters was 12 and the oldest was about 18, but the sisters were overseen beautifully by the wonderful Granny Kittle, whose 97th birthday party I later attended as a little girl. Due to the Depression, jobs were scarce for all, but Renie found a job at a newspaper in Long Island, the Daily Review, where she worked on the obituary pages, interviewing families for information for the listings. And she went forward from that job to Conde Nast in New York City, to Cue Magazine, where she did drama reviews, and to Glamor and Seventeen magazines (Editor and Editor-in-Chief.) In the 1950s and 60s, Renie wrote many short stories with her writer/artist husband, Louis Kamp, for the Saturday Evening Post. She then began writing for films, and in collaboration with other writers, had screenwriting credits for "Paris Blues", 1961, "The Lion", 1962, "The Sandpiper", 1965 (screenplay by Dalton Trumbo, Michael Wilson, Louis Kamp and Irene Kamp), "The Beguiled", 1971, and "The Possession of Joel Delaney", 1972. Renie and Louis both went on to write plays, and in 1966, Renie had her play, "The Great Indoors", produced on Broadway. Renie died in 1985 at 75. Her obituary can be found in the New York Times archives, titled: "Irene Kittle Kamp, Editor Who Wrote for Stage and Films."

THis below, from the New York Times archive, is Renie’s article about her surgery for cancer in 1979:

Health; FACING A NEW FACE ‘When I was told I had cancer and that surgery would take off my nose, I was sure the only way I could deal with it was to kill myself.’

About the New York Times Archive:

September 9, 1979, page 129 - This is a digitized version of an article from The Times’s print archive, before the start of online publication in 1996. To preserve these articles as they originally appeared, The Times does not alter, edit or update them. Occasionally the digitization process introduces transcription errors or other problems. Please send reports of such problems to archive_feedback@nytimes.com.

A year and a half ago, I went into the hospital at the Medical Center of the University of California at Los Angeles and had my nose and part of my face removed by Dr. Harvey Zarem, head of plastic surgery at U.C.L.A. The operation is called a resection of squamous cell carcinoma of the nose, the upper lip and the jaw bone. I waited until I was quite alone to look into a mirror and see the great hole in my face. For a moment everything inside me seemed to lurch sideways and up as though all of me wanted to get outside of me. And then my stomach steadied and I swallowed bile. I stood forlorn in a bleak landscape. I had stayed too long at the fair.
When I'd been told that the lesion inside my nose was cancer and that if not removed it could spread and kill me and that the necessary surgery would probably take off my nose, I was quite sure that the only way I could deal with that was to kill myself.
I am 10 years younger than the century. I have, as a Chinese curse has it, “lived in interesting times,” and while I can't say that it has all been grand, it has certainly all been rich, wonderful and also terrible. Go now, I told myself, before it gets to be just plain terrible, all wonder gone.
But I didn't go. I had just been through a very good experience and I simply would not accept the possibility that my end was near. I had finished a rough draft of a new play, “Sashay Ladies, All Sashay,” that had two very affirmative readings at the little Los Angeles theater that Oliver Halley and Elizabeth Forsythe Bailey had established for playwrights, and I thought if I can hang around a while longer, I will see the play done big and then I will go quietly. I learned that while surgery was the preferred treatment for nose cancers, there had been some success with cobalt radiation; so I chose the radiation. I had six weeks of it; Louis Kamp, the man I live with (who is my former husband), and I went to New York to celebrate. On our return to Los Angeles, another biopsy showed the old squamous cell to be still very much there. Surgery was imperative.

As I looked at what had been my face, I was the little fox, cornered. I could not go now. I had neither the strength nor the courage nor the privacy necessary to do it. I had let myself get involved with people whose work it was to take off my face and give it back to me; I could not quit in the middle. It was just plain terrible at this point and there was nothing I could do about it.


This below is a photo of Renie interviewing Danny Kaye while she was at Cue Magazine: 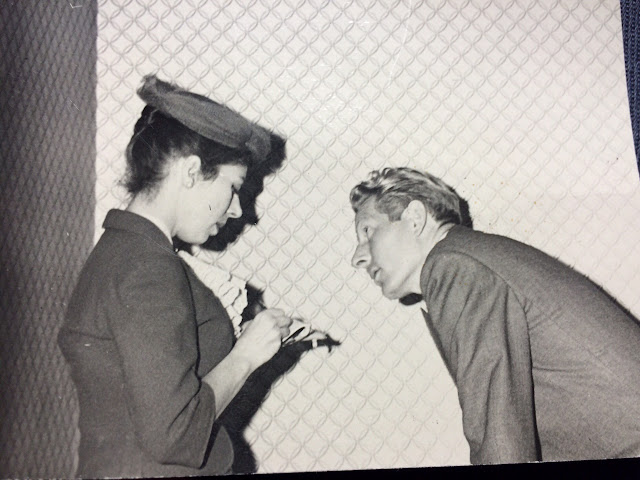 And this is Louie's inscription in purple marking pen from the back of the photo: 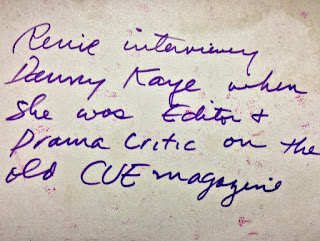 When Renie died, Louie began sending things in large mailing envelopes to both my mother and sister out in Long Island, and to myself and my two daughters. They were fascinating things pertaining to our common family history, which Louie knew we would appreciate. I think Renie found interesting family history information when she wrote her play, The Great Indoors, and also the screenplay for The Beguiled, because her grandfather (my great-grandfather) was a Union soldier in the Civil War, and his wife was Granny Kittle who grew up in North Carolina, the very wonderful grandmother who helped raise Renie and her sisters (and the young man who was my father.)

Among the things that Louie sent us were photos like this above, and some wonderful notes and information about themselves, all revelatory of the intelligence and humor and creative inventiveness of these two people.

Will post more pictures up ahead, but also note there is an earlier post on this blog, dated 12/2/2013, that is also about Renie and Louie, and is titled: "EVERYTHING...and its Opposite", a favorite concept of Renie's.