There is a library in Connecticut that has some very special qualities, which I will describe below...but also want to announce that there will be an exhibit, in its Keyes Gallery, of my watercolor paintings, and watercolors and collages by fellow Connecticut artist, Anne Coffey.

First, some information about this unusual library, then more about the upcoming exhibit which will be on view from October 2nd through October 28 of 2015... 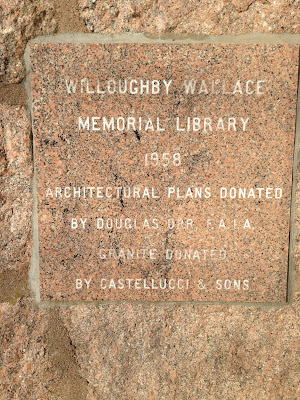 A plaque at the entrance to the library 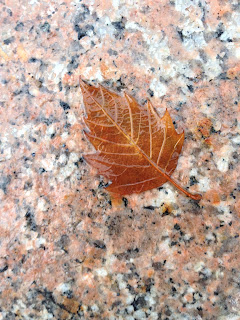 A close-up of the pink granite

There is a wonderful book, Flesh and Stone, Stony Creek and the Age of Granite, edited by Deborah Deford, which tells the story of the quarry whence came the beautiful pink granite of which Brooklyn Bridge is made, as well as the base of the Statue of Liberty, and many other artifacts around the world. From the book's jacket:
"This is the story of a changing world. From the formation of pink granite deep in the heart of a volcano to the urbanization and industrialization of a nation, this story traces the forces that changed not only the face of the Earth but also the heart of a nation and the soul of a village."
Published by Stony Creek Granite Quarry Workers Celebration in association with Leete's Island Books, ISBN # 0-918172-29-2

The library itself is made of the pink granite, not only its handsome architecture, but the pavement outside and some sculptural forms out on the grounds...and across from the library lies Long Island Sound itself, with the first of multitudes of Thimble Islands right offshore, a house and a couple of trees residing thereon.

From an article in the New York Times, June 24, 2007, by Eve Glasberg, How Many Thimble Islands? Depends on the Tide:

"The Thimbles are an archipelago of 100 to 365 islands, depending on whether you count small rocks, reefs, ledges and sandbars that surface at low tide, off Branford, east of New Haven. The largest, Horse Island, owned by the Peabody Museum of Natural History at Yale University, is 17 acres. They look like chunks of coastal Maine - with pink granite bases and lush covers of hardwoods, pines and thickets - that have somehow ended up in Long Island Sound."

The article by Eve Glasberg tells much about what living on one of the islands is like...this is a nice paragraph from the article:
"The Thimbles begin just 200 yards offshore with Wheelers Island, less than an acre and dominated by a replica of its original house, a four-story Victorian with wraparound porches and a cupola. Similarly small islands farther from shore...each with a single century-old house, sit on the horizon and appear very fragile. If the world were flat, you'd think a wind would push them over the edge."

There is information in the article about tour boats that take people out on the Sound to view the islands and learn something about their history, as well as a kayak expedition and water taxis.

You can read the whole article on the New York Times archives:

"Known to the Mattabeseck Indians as Kuttomquosh, 'the beautiful sea rocks', they consist of a jumble of granite rocks, ledges and outcroppings resulting from glaciation...the islands themselves - long prized by sailors on the Sound as a sheltered deep-water anchorage - comprise 23 that are inhabited (most of them wooded), numerous barren rocks and hundreds of reefs visible only at low tide."

The exhibit will be in the Keyes Gallery at the Willoughby Wallace Memorial Library, October 4 - October 28, 2015, with an artists' reception on Sunday, October 11, from 4 to 6 PM. 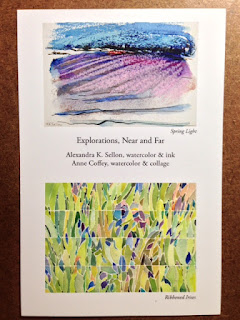 My work includes watercolors, ink drawings and watercolor with pastel...here are a couple of the paintings: 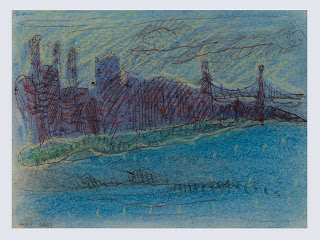 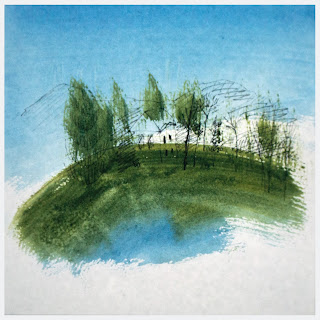 Curve of the Land 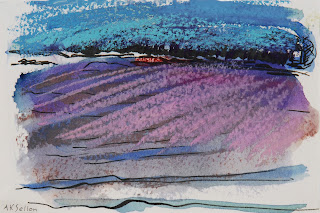 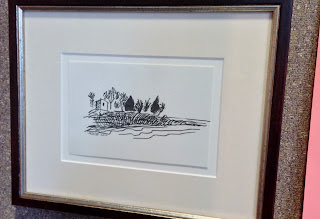 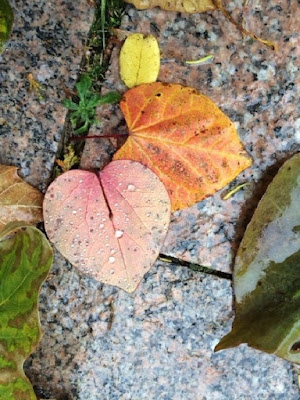 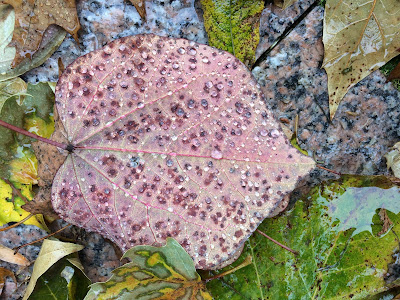 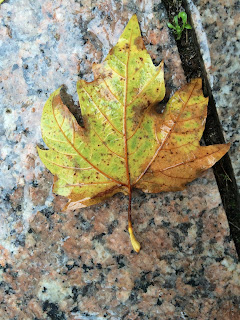 I had taken these photos of leaves gracing the walkway in front of the Library the last day of the show, one of wild wind and heavy rain. But shortly I will post photos of the Reception on October 11th...a lovely day of nice people, delicious food, and hospitable weather!
Posted by Alexandra Sellon at 1:29 AM No comments: