Why I Love Writing...and Proofreading

Notes pertaining to my enjoyment of... and desire to do more of...the above


I am the great-granddaughter of a man described as both "the dean of proofreaders" and "a walking encyclopedia". His name was Samuel Rutan, and he was the typographer at a newspaper in New York City called The New York World. Wikipedia says "The New York World was a newspaper published in New York City from 1860 until 1931, and played a major role in the history of American newspapers. It was a leading national voice of the Democratic Party." My father told me his grandfather had three favorite books: the dictionary, the Bible, and Aesop's Fables (from the latter of which he used to read to Dad.)

I grew up in a family that loved reading. Both my parents were born in the early years of the 20th century, one in 1902, the other in 1906, and both were unable to afford college and went to work shortly after high school. It was the early part of the Depression. My mother passionately wanted to attend Cornell University where her best friends were enrolling as freshmen. Her father, Louis Fleming, was an excellent book illustrator who also did magnificent lettering for books and advertisements, but his income was always freelance during all the years my mother and her brother and sister were growing up. (Papa enjoyed what he did but it still was a wonderful thing that happened when later in life, at age 50, he became Art Director for Conde Nast Press and Harpers' Bazaar,  where he continued until he retired at 76.) During those early years, Papa had some wonderful clients, including Mohonk Mountain House, for whom he did, for years, all their printed matter: brochures, menu covers and other suchlike. I have pictures (black and white, no color photography then) of Papa and my grandmother visiting up there in New Paltz every year for him to sketch and take photographs for the illustrations he would do at home on his drawing table in Freeport.  The first image here is one of the Mohonk illustrations; the second one was done for Texaco. 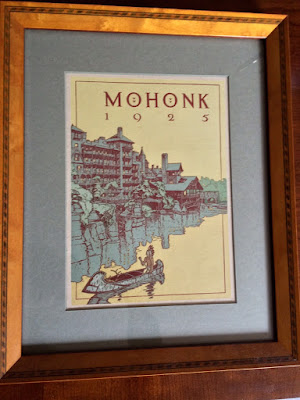 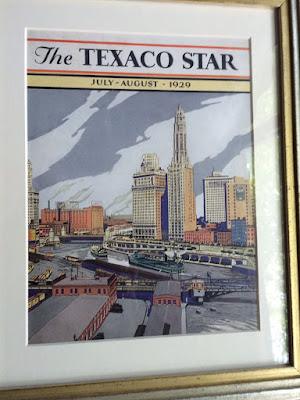 So my mother, when she finished high school, Cornell and other colleges inaccessible, enrolled in a free teachers' training school in Queens, and after two years, began teaching at a grammar school in Springfield Gardens in Queens. In high school she had written poetry, and had thought of becoming a journalist, and would have dearly loved to go to Cornell, but in the long run, she was the essence of a self-educated person. Reading always, and as I particularly remember, not only doing the NY Times crossword puzzle every Sunday but also the Saturday Review of Literature puzzle, which appeared in that magazine monthly but which was a highly complicated one with not only the customary crossword box array at the top but another linked puzzle below. And the words that ended up filling the completed puzzle above were quotes from a well-known author whose name would be spelled out in the puzzle below as well as the piece of writing the quote came from. Mom and her sister Connie, my wonderful aunt, would conquer the complexities of this sophisticated puzzle and compare notes about them when Connie would visit us. Weekly trips to the library to reserve books were part of my growing up.  My father also went to work directly from high school at age 18 at a brand new company in those years: the New York Telephone Company. With another couple of young men at his job, he drove every night after work to Pratt Institute's School of Engineering in Brooklyn, where he received a certificate in electrical engineering. Dad was very smart and capable.  He was also a terribly nice person. His mother, before she died at the age of 43, told my mother that she had raised Leighton to be chivalrous toward women. When he was ill, in the few months before he died, he came out to the cab where the girls and I had traveled from the Long Island railroad station, and tried to carry our bags into the house. He was a hero of goodness and genuineness to me.

And as to my mother's self-educating nature, when my sister and I were kids, my mother frequented the little library in our town. It looked like a fairy tale house: brown shingled, white trim, and leaded glass windows. My sister and I would hang out in the children's department, choosing books, or playing with a dollhouse installed to entertain the kids, and Mom would be reserving books she had read about, later receiving postcards announcing their arrival at the library. She and Dad would read at night, when time permitted at the end of a day. Mom read a lot of things, but they both enjoyed rather good mysteries, which I myself do now as well. Mom also bought wonderful books for years and years, exceptional ones, which resulted in collections we each of us have in our homes, my daughters and myself. We so much appreciate her wonderful taste in books, and likewise, my aunt Connie's. During the Depression, Connie also went to work after a short business school course, first at one of the pulp magazines of the 1930s, Adventure Magazine, then on to her beloved long time job: Secretary and sole employee for the esteemed two-man literary agency: Russell & Volkening (Henry Volkening and Diarmuid Russell.) Connie also loved books. Both my mother and Connie were the biggest readers in our family. But I also want to mention that Mom, Dad, Connie, and all their siblings automatically had had Latin in their school days. And I fervently wish now I had had Latin as well.  I took French, as my sister had, which I quite liked, but now understand how germane Latin is for grasping all the underpinnings of the English language.

Finally, I have some other literary relatives: my father's sister, Renie, (Irene Kittle Kamp),  who, like Connie, worked at various jobs in New York City in the 1930s, becoming eventually a Drama Critic for Cue Magazine, Editor of Glamour Magazine, then Editor of Seventeen Magazine. And she also wrote a series of short stories in the 1950s for the Saturday Evening Post along with her husband, my uncle, Louis Kamp. They were a writing team, and I remember when we visited them where they lived in the summers in the 1950s, in Hampton Bays, NY, that they had part of the manuscript of Hemingway's "The Old Man and the Sea" printed in reverse, dark blue like a blueprint, which Louie had made into wallpaper in their bedroom. He was also a painter and made very nice small wood structures of boats out of wood scraps that he painted and posted over all the doorways. Renie wrote a lovely little short short story about him, when they first had met and were to meet in New York City at some prearranged place, and what happened when he first didn't turn up, and then when he did.  Titled "Just Remember That, The Short Short Story", it appeared in Colliers Weekly, May 4, 1946. (It can be read on The Unz Review: An Alternative Media Selection, Content Archive of Printed Periodicals and Books.)

Renie went on to become a screenwriter for movies including "Paris Blues", "The Lion", and "The Beguiled". And she wrote a play that was produced on Broadway in 1966, "The Great Indoors," It did not stay open for long, but my family and I were happy to have attended the opening night. She and Louie both wrote plays over the years, of which I have a few manuscripts which Louie sent us when Renie died. I have many fascinating letters each of them wrote to us in the family. And to go back to my first paragraph above, it was in one of those letters Renie wrote to Mom and Dad that she said Samuel Rutan was described as "a walking encyclopedia."

So this above is about my family background, but as to my own experience with writing:

I had a very interesting long-running job when I lived in New York City, which was to work for Hannelore Hahn, the founder and director of the International Women's Writing Guild. Hannelore also published an award-winning memoir about her childhood in Dresden, Germany, prior to World War II, "On the Way to Feed the Swans."  It was while working for Hannelore and her small staff of people that I had done quite a bit of proofreading of the Guild's magazine: Network, which is how I developed such a love of it. The sense of clearing away anything that obscures the forward flow of thoughts from the page to the reader...that's how it seems to me, whether one is reading someone else's work or one's own.

Since moving to Connecticut, I have assisted some writers with memoirs, and another with a collection of short stories.  And something I particularly liked, having a strong interest in science and nature, was transcribing the interviews for two Scientific American television series: The Human Spark and Brains on Trial. The transcriptions were for the producers to use in editing the film, and as Alan Alda was the interviewer in each series, this was a great pleasure, as his questions and the scientists' responses were both fascinating, and not surprisingly, very funny at times. There were a great many of these transcripts to be done, and I often ended up working late at night, sometimes tired, but finding the subject matter so enlivening I was sorry when they ended.

My interest in science/nature also stems from an earlier job: working for Fritz Kunz, the editor of a superb magazine called Main Currents in Modern Thought. I will add here a few titles of  remarkable articles that appeared in Main Currents over the years it was published, the titles alone giving an idea of the wonderful range of subject matter.

The Method of Science and the Meaning of Reality, by Henry Margenau
The Enigma of Human Nature, by Gardner Murphy
The Wedding of the World's Civilizations, by F. S. C. Northrop
The Reality of the Non-Material, by F. L. Kunz
The Colors of Life, by Adolf Portmann

I love proofreading, and think maybe when I am doing it (and enjoying the process) my great-grandfather Samuel Rutan might be hovering over my shoulder...I hope so.  But I hadn't known much about his proofreading prowess until well grown up myself, so think it may be some familial inheritance that makes it so appealing.

For proofreading, editing, or transcribing information, please email me at:
Aksellon@aol.com

The website where my artwork (paintings and drawings) can be seen:
Aksellon.com

And, on Instagram, a place where one can post images and words and communicate with some wonderful people all over the world in what one of these people calls "our global community":
@Aksellon