Beginning with a photo just taken this morning, these are the significant underpinnings for a small bunch of plants or rootings that need repotting and are sitting and waiting, on various shelves, window sill and countertops of my kitchen. 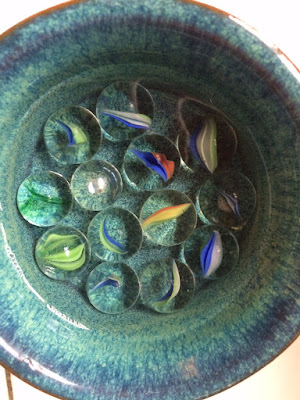 The image appears in a post done earlier today on my Instagram site. Instagram is an institution I've come to love, not only as it affords a chance to say and show things one cares about, but it also enables one to read and see the same from others...many of them far far away geographically but often in tune with and enhancing one's own perceptions of life...images speaking very well among human beings!  On Instagram, I am @aksellon

Words that accompanied this photo:

"I just bought some of my favorite marbles from Jordi's, the toy shop in Guilford...for repotting plants. I usually put them at the bottom of the soil in any pot without a drainage hole. You will see that they are all the clear type with a strand of color running through...I like their waterlike quality for the plant's roots to be near. When I got home with the tiny paper bag, I wanted to soak them a little bit in hot water before using and looked for a small bowl to put them in...this is the bowl I found, and note how there was just enough room in the bowl for the number of marbles I had bought! Apropos of washing the marbles, have always washed any flowerpot am going to re-use as well as any implements (scoops, plastic knives, etc.), anything that comes in contact with the roots, as heard once on Channel 13, said by their then gardening expert, a sort of Julia Child of houseplants, that one should even sterilize used terra cotta pots by putting them in the oven briefly, to kill off any fungi/plant diseases...will look up and find her name and supply it here up ahead."

I tried to find the name of that British gardener who had a regular show on Channel 13 during the Julia Child era, but wasn't able...however, I did find lots of information about my favorite gardening writer from the New York Times, Anne Raver. Below is a tiny excerpt the Times had in their listings of all her columns (many of which I saved over the years, clippings in my own "archives." ) Note that each of the Times' listings of her columns has a small paragraph like this below, or a caption, that you can click on and then read the whole article...there are lovely photos as well, but just the range of things she wrote about is marvelous. Here's the paragraph, which one can find in the New York Times archives and then read the whole column.

The Wisdom of the Trees
It was a chilly gray day when I left the New York Public Library at Fifth Avenue and 42nd Street and headed west on 42d against the wind. Usually under such circumstances, you keep your head down, but the trees pulled mine up. You can't help but look at those London plane trees, as you walk by Bryant Park. they, too, lean forward - all 200 of them - like rugged New Yorkers bending into the wind."
By ANNE RAVER
March 15, 1992

This, the first paragraph of that column, appears among the Times' listing of her articles from the 90s through 2015.  This was from March of 1992, when I was still in New York, and I think I must have saved this one, among many others!

The link to Anne Raver's "In The Garden" columns in the New York Times:
http://www.nytimes.com/by/anne-raver

Word substitutions (AKA: "Slips of the tongue")

I wanted to write something about a phenomenon which has occurred frequently in my life, instances of which I keep written down on scraps of paper kept in a drawer in my desk.

I will provide a list of them below, but wanted to explain that I have this trait (a kind of amusement the brain seems to be providing in an ongoing fashion, which I appreciate, like playing Scrabble with oneself, hoping it is not some sign of deterioration due to age, yet it all began for me when my children were little and asked me what was for dinner, and I said band aids (but meant hot dogs.) There is usually something about the substituted word or words that echoes the original: in this case, the two syllables, but also something else that ineffably connects the two. My wonderful Aunt Connie, who lived many a year with full brain power, herself fell into this same trait early on, and she and I often compared the absurdity of the substitutions, yet their somehow internal logic.

Connie had a lovely black cat named Cinder (and later two other cats) to whom she often spoke in a conversational fashion while in the kitchen, and telling the cat what she was making for breakfast, she said (for French toast), Scotch tape.

For the list of my own absurdities, first I should mention what inspired me to write this today. I have a great love for acorns...there is a collection of them out on my balcony railing, there are acorns scattered companionably on the dirt my houseplants reside in, and I frequently see ones outside that I just can't resist picking up and saving. Little perfections. The other day, walking down to my car in the row of garages where I live, I saw and picked up the tiniest little acorn I have ever seen...sap green and brown, and not only was it darling but it seemed to have a tiny bite taken out of it or just some minute imperfection making it even more appealing, and for a reason I can't comprehend, I stupidly tossed it to the side and continued on the path. I quickly thought better of it though, and stepped back to look where I'd tossed it...my neighbors were just going down the hill of the parking lot and saw me looking for something and rolled down the window and asked had I lost something? I confessed it was an acorn (this at a time when there were and are a million acorns everywhere around us, but I did say that as an artist, I wanted to find it again and draw it...I felt a little foolish if I hadn't given a good reason to find it again.) But it would not be found. I still now cast an eye out when I walk past that spot, but have not yet seen that same little guy. I have a couple more "tinies" up here in my apartment, and said to myself maybe I'll draw a couple of these "pumpkins", therein establishing the first time I will have made this particular substitution...and note that once said, the brain seems to think it amusing to keep it at the ready for all future mentionings of acorns (now pumpkins.)

Here's a somewhat embarrassing one I committed last year...I said to my daughter Liana, I will mail it to you Mandarin Orange (instead of Priority Mail.)  I have no idea where it came from but assume it has something to do with the number of syllables (like acorn = pumpkin.)

I have more and will add to this list up ahead, but here are some other related things:

I heard a guy doing the weather on television who said "just after sunfall".*

And when recently looking for a pillow case in my linens chest of drawers, I said to myself: "I know there's a teakettle...a coffee pot...a placemat...a potholder...in this drawer."  That about sums up the syndrome...they all being domestic items having to do with the household world...four of them have three syllables, one has two, but they all are confreres in the world of domesticity!

Here are some photos of my acorn collection... 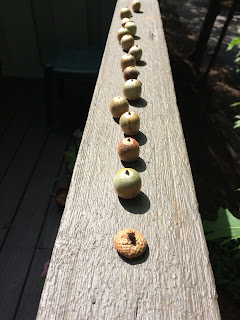 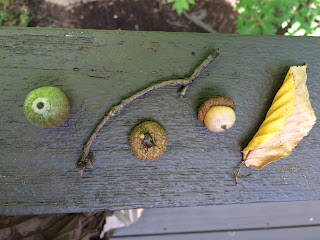 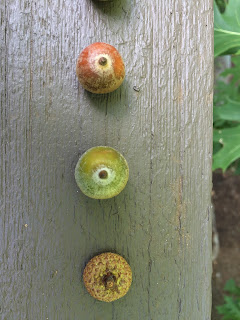 * Looking it up in the online Webster Merriam dictionary, I just learned that "sunfall" is a legitimate word...another way of saying "sunset". But it seems to me another indication of man's view of himself as at the center of the stage, so to speak.