Since this below was written, so much is happening out in the real world, beyond my own personal experience of it. I keep thinking about the years I spent in New York City, and wanted to mention a few things here before all our hopes that this terrible nightmare of all the people will come to some resolution.

To go back to soothing memories of the untroubled past, a piece of music comes to my mind: Bobby Short, singing "I Happen to Like New York"...so shall give here a small view of my own New York feelings.

This is a reminiscence of a hot day last summer when I had gone in to New York on a Metro North train from Connecticut, not remembering what exactly I had done earlier that day but thinking it was most likely a stop to see my favorite Medieval gallery at the Met Museum, and visiting another place right nearby: Zitomer Pharmacy (where my daughters and I had all our prescriptions filled over the years when they were kids, and where they lavished attention on "Hello Kitty stickers", modestly priced at 35 cents, that had pleased them immensely.) I love going back to that neighborhood always,  especially feeling at home in the Met's Medieval Gallery, where I can visit certain 13th Century polychromed little figures as sweet to me as my little grand-dog Archie.

That day, I had been walking downtown on Park Avenue, having left the Met Museum and Zitomer's, to go back to Grand Central from whence I'd come earlier. It was a disgustingly hot day, and as I walked down Park Avenue, feeling depleted and dehydrated, all I could think of was ice cream, how it would revive me, but was reluctant to walk either east to Madison Avenue nor west to Lexington to find some place where I could find and have some ice cream. I kept thinking: I must persevere and keep on my way to the station so I can get on a train and get home. I continued walking downtown on Park through the 70s, the 60s, the 50s, then finally finding one of Grand Central's entrances, the one on Vanderbilt Avenue, and got inside the station,. Once there, I could find no signs of any available ice cream, then saw, miraculously, a small neon sign, subtle but elegant, perched just above the main marble floor of the station. It said Cipriani Dolci and I had just read an interesting article about it in the Times or the New Yorker, so made my way in hopes that they were open. I saw two little tables out on a porch-like little platform, a few feet above the station floor, and went up the steps to speak to a waiter standing there, asking him if they were open for someone who just wanted coffee and some ice cream. He said yes, and I sat down. So glad!

I sat admiring the majesty of Grand Central's extraordinary ceiling, so high above, and felt like I had made some heroic trek to get here, to the salvation of cold and delicious ice cream, that would revive me for the trip home. He brought the dish of vanilla ice cream and a cup of hot coffee. My plan was to spoon some of the coffee into the ice cream and refresh my being, feeling I had reached some safe way-station, when the worst happened: I tipped over my coffee cup onto the whole of my little table, drenching its white cloth covering (though my ice cream was still intact.) He removed the debris, and I finished the ice cream, saving my soul from the heat exhaustion and dehydration of the moment. Very embarrassed was I, but he, in gentlemanly fashion, made nothing of it. I paid my tab and went down the steps and on to search for my train track.

From this vantage point...I would give anything to be heading back to Grand Central, to be back in familiar neighborhoods, in the ordinary but wonderful texture of life. We all know, though, that this is now, and memory will have to suffice...but here's to what we will call normalcy and it is very welcome! 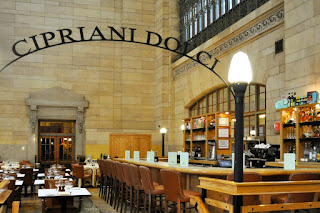 An online photo of Cipriani Dolci in its marble-walled environs at Grand Central Staiton.


Today,  Sunday, May 10, 2020, I found this picture below on the front page of  the Sunday New York Times, its caption reading:

"Art Is Long. So Is Lockdown: Outside the Metropolitan Museum of Art, New York" 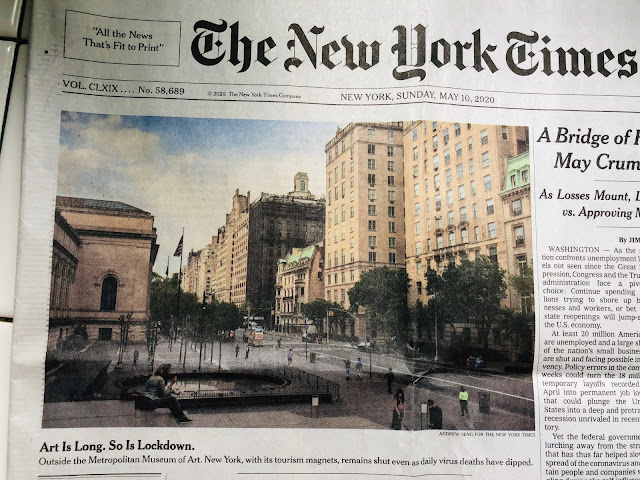 I,  too, with a million zillion others, happen to love New York.


Posted by Alexandra Sellon at 3:03 PM No comments: