From the Train, Part 2

This expands upon the previous post, From the Train, : 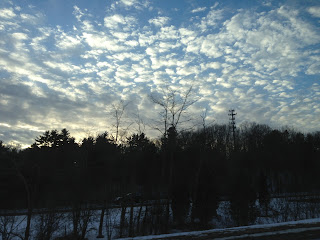 1.
I found myself still thinking about being 18 years old and taking that Long Island Railroad train every morning to Brooklyn, and now am remembering another experience from even earlier. My grammar school was on a main road in my town and parallel to it was a little short street known as Brookside Avenue. I had several friends who lived on that street, a lovely tree-lined one having a brook down behind the back of the houses, at the bottom of a hill. Now and then we kids would go at lunch time over to Brookside and down the hill to see what was going on at the edge of the water, and what we found there was tadpoles! I distinctly remember liking so much the several stages of the frog: first a wee black shiny fish-being, then the tadpole with its feet manifesting, and finally the perfect frog, though very miniature and of a shiny material something like the bottom of the brook. And am thinking that the person on the train, existing for a space between worlds, is a tadpole, with some features of the earlier stage and some of the end result.  Another thought: the fish tail of the earlier stage had to be sacrificed so that the sea creature could become a land creature.

From a Wikipedia article, first, a nice chart of the process:

A quote from the Wikipedia article sums it all up:

As a tadpole matures, it most commonly metamorphosizes by gradually growing limbs (usually the legs first, followed by the arms) and then (most commonly in the case of frogs) outwardly absorbing its tail by apoptosis.

It had begun by breathing through gills like a fish, and ends up as a frog, drinking the air from the surface of the water.

2.
Next, a wonderful story about a train fan, in the person of couturier Christian Lacroix: "Possessed, A Timely Way to Go Back in Time", written by David Colman, published in the New York Times, June 1, 2008. 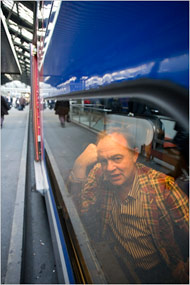 GROUNDED Christian Lacroix, at the Gare de Lyon in Paris, prefers the “magic” of the rails over the irritants of the skies.

I love this picture by Valerio Mazzanotti, as Lacroix looks so comfortable in his viewing capsule, ready for what will ensue. That is exactly how I feel once settled on a train, suitcase within reach, phone camera at hand. A few quotes from the article, where David Colman notes that Lacroix now has a house in Arles as well as living in Paris for years:

"But as much as he now enjoys his weekends in Arles, he likes the back and forth of being on his favorite conveyance better. 'I am really like a child when I am on the train,' he said. 'When I was young, very near to us was Le Mistral, a very social, elegant train from Paris to Cannes, and you always knew what hour it was when it passed. I got to know the smell of coal, the smell of the smoke and the beautiful noise of the machines.' "

Colman says: "For Mr. Lacroix, heaven is, very simply, being on the seat of a train, going almost anywhere."

Lacroix says some things here that so appeal to me, one of which is:
"...you are always in between two stories, between being two different persons."  Wow, say I, still aspiring to tadpole-hood!

The link to this article in the New York Times archives:

3.
Another entry in one of my train notebooks, this one regards the inaccessiblity of a drawing pad and moving on to writing something instead: 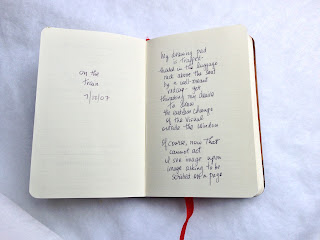 This is another notebook page like those in the earlier train post, this time mentioning a drawing pad imprisoned in a suitcase on an overhead rack on the train. It sounds a bit old-fashioned: the word "scribed" not really a favorite, but it somehow fell on the page.  But to continue, I once read that Yeats had been an art student in Ireland alongside poet/writer A.E. (George Russell), and it happens that I have several very interesting books about these folks: William Butler Yeats MEMOIRS, edited by Denis Donoghue; George Russell (A.E.), by Richard M. Kain and James H. O'Brien, The Irish Writers Series; and a special book: An Only Child, by Frank O'Connor. In one of these books I distinctly remember someone saying that when Yeats was at a Dublin art school with A.E., he was not able to afford paints and turned to words instead. I'm not sure if this is as it actually was, and am still searching for the very words that say it in one of these books.

And thinking again about Pratt Institute and Richard Lindner's Creative Expression class, and the flow back and forth between words and images: I'm finding it hard to sort my own photos and drawings and writings into separate piles...they seem to keep referring to one another. Even family photos, which would seem easy to keep separate from others, merge into a sea of interrelated subjects for which no suitable filing system can be found. Doing these blog posts gives me a chance to put these unlikely things together, like some kind of invisible paperclipping.

Finally here:  more photos taken on the train, one of which shows my suitcases within eye-scope, as am unable to lift them up into the overhead compartment without help, always trying to find a seat on Amtrak where one can sit near one's bags...the comfort zone! 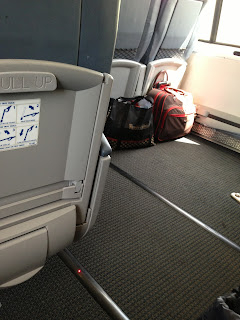 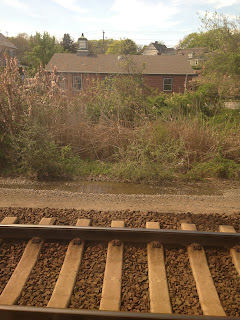 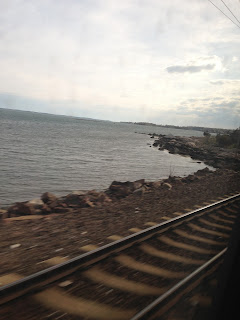 Posted by Alexandra Sellon at 8:33 PM

Another fantastic post! I love your tadpole/train analogy. And the bit about Lacroix. Seems like such a nice man! Everytime I hear his name I think about Edina from "Absolutely Fabulous" who is always bragging about wearing his clothes. I love these train posts of yours, hope to see part 3 in the future. The photos at the end are just lovely!

Love this! Amazing to see the progression from tadpole to frog. Fast forwarded evolution. So tiny in the end! I like the idea of being of transforming along your own journey. So glad you started this blog!