Pauline Tish was the wonderful dance teacher at Pratt Institute during my years there from 1957 to 1961, a time when dance was not then part of the curriculum there, but which very much embodied the very essence of one's experience at an art school during my four years at Pratt.

When I first arrived at Pratt in 1957, coming by subway from the Atlantic Avenue Station of the Long Island Railroad on  Flatbush Avenue, I was a bit stupefied by the sheer number and ambitiousness of the courses presented to the incoming freshmen. On hearing about a dance workshop available as an excurricular activity, I leapt at the opportunity to do something freeing from the rather alarming challenge of the art classes. I felt it was going to be something pleasurable, and was not disappointed.

The classes were held on the stage of Pratt's theatre, Memorial Hall and began with us all lying on the floor, moving to the soft beats of a drum Pauline carried around the stage. A small and emphatic figure in black leotard and long skirt, she took us through floor exercise and stretches, followed by vigorous movement on our feet. But what to me was so intriguing was her explaining that ultimately each of us could arrive at creating our own choreography using whatever germ of interest that inspired us, which seemed to me something quite akin to the course of study in the visual arts, but bringing all aspects of experience into one focus: the visual, the three-dimensional, the elements of movement and music, and a chance to communicate with a present audience on a lit stage, in the mysteriousness of a darkened theatre. She, of course, oversaw the choreographical explorations, guiding, in a respectful way, one's own inclinations, and honing the result to something one could be proud of. Yet there was no forcing of her point of view on us, the initiates, more a mood of suggestion to make a professional result. To me, it seemed to surpass the visual arts efforts one was undergoing as a student, allowing a wider, freer kind of expression to happen. Hence, I enjoyed it hugely!

I regret that I cannot right now find some wonderful photos taken by a photographer who came to those Dance Workshop performances during the years I was at Pratt...I know I have them here somewhere, carefully tucked away, and shall keep searching for them, but they do attest to Pauline's both democratic and mentoring leadership of our efforts. Once I find them, I will post them here. And anyone else who was involved in these experiences will enjoy seeing the evidence of her excellent and subtle guidance, and the resulting good effects.


This below was written about Pauline in the Jewish Women's Archive:


Pauline Tish was professor emeritus and former chair of the Dance Department of Pratt Institute. Trained as a dancer with Martha Graham and Louis Horst, Tish performed with Helen Tamiris during the WPA Dance Project and was instrumental in the reconstruction of Tamiris’s How Long Brethren? performed at George Mason University in 1991 and the American Dance Festival in 1993 and 1995. Tish received a B.A. from Hunter College and an M.A. in dance from New York University, where she also pursued graduate studies in anthropology.


Here is an excerpt from Pauline's article about choreographer Helen Tamiris, which also appeared in the Jewish Women's Archive:

"Helen Tamiris was a pioneer of American modern dance. She brought a social consciousness to the concert hall and went on to become the director of the Dance Project for the Works Progress Administration (WPA) and later an acclaimed Broadway choreographer. Her works were uniquely American, dramatically depicting important social issues of the time such as racism, poverty, and war. In 1928, she wrote the following manifesto in her concert program: “Art is international but the artist is a product of a nationality. … There are no general rules. Each original work of art creates its own code.”

She was born Helen Becker on April 23, 1902, into a poor but cultured Orthodox family on New York City’s Lower East Side. Her parents, tailor Isor and Rose (Simonov) Becker, had come with their son Maurice to New York in 1892 from Nizhni Novgorod, Russia, where they had fled from pogroms and czarist military oppression. Maurice Becker became a cartoonist and painter. Two other brothers were born in New York: sculptor Samuel Becker and art collector Peter Becker.

She attended New York public schools and later studied economics and labor statistics at the Rand School (1918–1920). At age eight, she began to study Isadora Duncan–style dance at the Henry Street Settlement, and at age fifteen her professional dance career began when she auditioned for the Metropolitan Opera Company Ballet. She danced for three seasons at the Met, toured with the Bracale Opera Company as a ballerina, and performed in the Music Box Review in 1924. Early in her career she took the name of Tamiris, a ruthless amazonian queen of Persia who overcame all obstacles.

In 1927, she presented her first solos in a concert called Dance Moods at the Little Theater in New York. The following year, a new concert at the same theater attracted excellent notices, and she was described as being in the forefront of the younger dancers of the “new dance.” This concert included Prize Fight Studies and the seminal and dramatic Negro Spirituals. Later in 1928, Tamiris became the first American dancer since Isadora Duncan to tour Europe, where the critics hailed her as the outstanding interpreter of American life. In 1929, she founded the School of American Dance and her company, Tamiris and Her Group, which she directed until 1945. From 1930 to 1932, Tamiris banded together with Martha Graham, Doris Humphrey, and Charles Weidman to found and direct the Dance Repertory Theater, a cooperative in which the four companies shared productions and expenses.

During the WPA, Tamiris became a spokesperson for American modern dance. In 1935, she went to Washington, D.C., as the head of the American Dance Association to lobby for the inclusion of a separate Dance Project in the organization of the Federal Theater Project under the WPA. The Federal Theater Project operated from 1935 to 1939, and Tamiris became the director and main choreographer of its Dance Project. She also acted as the organization’s representative in Washington. Her major productions during this period were Salut au Monde (1936), How Long Brethren?(1937), Trojan Incident (1938), and Adelante (1939). She continued to perform Negro Spirituals, which contained strong elements of protest against prejudice, violence, and human suffering, and could be considered a metaphor for Jewish oppression. From 1935 to 1945, Tamiris created many modern dance works.

As she began to perform less, Tamiris moved into musical theater. She had taught movement for actors and directors and was skilled at moving large groups effectively in her own dance works. She began to create and perform musical theater material with her partner Daniel Nagrin, whom she married on September 3, 1946. She went on to choreograph over eighteen Broadway musicals with Nagrin as her assistant. These included Up in Central Park (1945), Annie Get Your Gun (1946), Touch and Go(1950), Plain and Fancy (1955), and Fanny (1955). Outstanding dancers who performed for Tamiris in these shows were Daniel Nagrin, Talley Beatty, Valerie Bettis, Dorothy Bird,  Pearl Lang and Pearl Primus."


When it came to the music for one's imagined dance-creation, Pauline would send us over to Manhattan to the famed Liberty Music shop, a place where, long before there were computers or cassette players or any online way of hearing music, you were able to select albums to listen to in one of the their listening booths, where you could hear all the bands on a particular album, and once something felt right for your "dance", you could buy the album, and bring it back in to Pauline, and she and you together would determine the exact right music for the dance-to-be. I remember one creation in particular: another student and I, Dorothy Connor, wanted to do something together that was based on "Degas" and "Toulouse Lautrec", and so we proposed our idea to Pauline and proceeded to first secure the music. Pauline sent us to Liberty Music for listening...I had already found a Chopin piece that I had on an album at home, played by wonderful pianist William Kappell, and that would be the Degas portion of the dance. But for the Lautrec, we went to Liberty and at Pauline's excellent suggestion, listened to a Francis Poulenc album and found the perfect musical equivalent of a Lautrec painting, a contrast to the quiet peacefulness of the Chopin. The missing photos are black & white, not color, the color being reds and blacks and Siamese pinks of a Lautrec painting, but the photos taken by Pratt's excellent photographer very much captured the spirit of the piece, the choreography, and the costumes.


This picture is one I found online, it is Pauline taken at a family wedding...the picture is a little blurry, but very much the way I remember her! 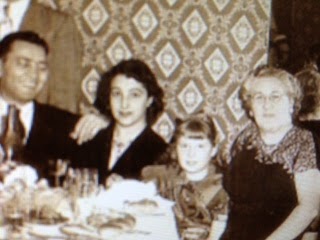 Posted by Alexandra Sellon at 8:33 PM