I have fragments of information in my memory, many residing in the names of various aunts.  Not necessarily mine, but those of other members of the family. One was Aunt Annie, another was Aunt Lizzie, and then the several sisters who were my father's aunts: Hattie, Ella and Sadie. But way back before all of them was Sally Ann (Losee) Moore, born in 1810, my grandmother Nana's great-grandmother. This I know because of a spoon Nana gave me when I got married, with its nice little note, and some things I wrote on the envelope, clarifying who Sally Ann was, and that her husband, Hugh, Nana's great-grandfather, was from Ireland. (I wanted to put all these ladies all together in this post because I also remember Nana mentioned an "Aunt Losee"...and hope someday will find mention in a letter in my files about that aunt as well.)

Here is the spoon in question, and below that, the card that came with it in Nana's distinctive handwriting: 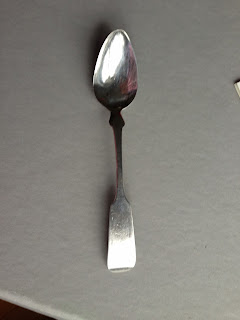 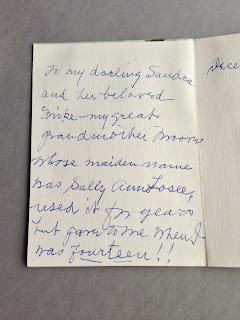 The spoon and its card reminded me of the earlier post about the booties Nana crocheted for me a couple of years before she died (I had not yet had children and she had wanted to make some for the children to come.) Here's something (paraphrased a bit) from that earlier post (The Shoe, Part 2, April 3, 2013) with the two pictures:


When I was a freshman in high school, my grandmother had recently come to live with us in Merrick, Long Island, since my grandfather had died and she would have been alone in their house. My high school involved both a longish walk and a bus from Merrick to Bellmore, and as I was getting dressed one morning, I tried on a couple of shoes, and it so happened that one was black suede and one was brown leather. Something must have distracted me because I ended up walking about a quarter mile to the bus stop still wearing the two different shoes. I was waiting with the other kids for the bus and a girl tapped me on the shoulder and said: do you know you have two different shoes on?  I blushed with shame and then thought gratefully of my gym locker where my sneakers were waiting. We had gym at my high school every day. (Sports were very important in that school, that was probably very good for us all, though sometimes annoying, but certainly this time, they were a saving grace.) I rushed there and put the offending pair in the locker to take home later and spent the day in the sneakers (and I should mention to any who might not know this, that no-one wore sneakers during the day at school in those years.) So I got through the day and went home and my grandmother was there (my parents both still at work), so I told her of my embarrassment and the solution to the problem, and she loved it. When I was a little girl, I had loved dolls a lot, and during the WWII era, there weren't all the American Girl Dolls and their clothing and accoutrements, and one Christmas Nana crocheted clothes for a small doll of mine. And whenever anyone had a baby, Nana would crochet booties for the baby, blue or pink accordingly. When I got married, Nana was in her mid 80s. And when several years went by but still no baby, Nana decided to crochet me a pair of booties. She made one in pink yarn and one in blue, and put them  in a little Lord &Taylor pink metallic box, with tissue surrounding them, and a card that said: "I tried to cater to your unusual love of variety - particularly in footwear!" Nana died in 1970 at age 90. and only after that came baby Liana in 1972, and baby Daria in 1974. Nana would have loved them very much. 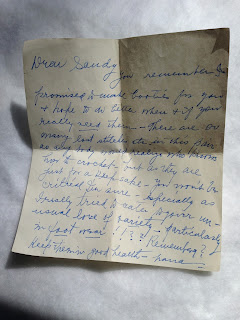 I wrote more in that earlier post about not always getting along with Nana when I was young, but this changed gradually over trme. During the years I was commuting to and from Pratt in Brooklyn and she was in her little room upstairs at night, I saw one night that her light was on very late, perhaps 2 or 3 o'clock in the morning when I was coming upstairs after a night's struggle with my art homework. I went in to say hello and sat down in her armchair and we talked for awhile. I saw that she was uncomfortable (a stomach-ache) but also maybe a little lonely (even though my parents were right there in the other room sleeping.) I think she was missing my grandfather. And this was a moment I still remember as charting a different course in our rapport.

So Sally Ann, Nana's great-grandmother, gave the spoon to Nana,  a spoon of such thin-ness that her initials were almost worn away on the handle. Nana said in her little note to me: "This little gift is an antique - not new - for newly weds - with all the love and good wishes I can think of...my great grandmother Moore whose maiden name was Sally Ann Losee, used it for years but gave to me when I was fourteen." Nana's name was Florence, my grandfather, Papa, always calling her "Flo". She had a wonderful cousin, Bonnie Moore, who used to visit Nana and Papa there in Freeport, a very buoyant person. Hugh Moore of County Down, Ireland, married Mary Ann Losee, and their daughter Maria was Nana's grandmother. (I want to know more about all, but am grazing on small bits of information, as only a few other people in the family wrote things down for the millennium, the way Nana did.)

As to two others of the aunts mentioned above: Lizzie was my father's great-aunt, second youngest of a family of eight siblings. And Annie was my mother's aunt, her father's one sister in a family of four sons. From things I occasionally heard said, I think they both might have been a little difficult in some ways, but I will be looking for photos and have some interesting things about each of them to report up ahead.

Aunt Sadie, Aunt Hattie and Aunt Ella were my father's three aunts (their names actually were Sarah, Harriet and Eleanor Rutan.)  I think Sadie was a teacher, I had a fascinating photo of her that's momentarily lost in my archives, hoping to find it soon. My cousin, James J. Keegan (Jim), is Aunt Hattie's grandson. Jim has published books on the genealogy of the Rutan family in America and its origins in Europe, so I want to add more information about his findings. Jim and I became acquainted only a short number of years ago (though our grandmothers were sisters) and that was through my cousin Nick Roach, who lived for many years in Kansas. Nick has sadly passed away this last year, but he and Jim, having found one another through Ancestry.com, went on to share many interesting bits of information and photos with one another, and then with me as well. 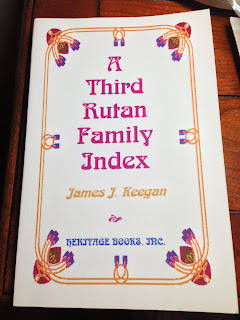 And here is an interesting paragraph or two from Jim's introduction to the book, telling how he first began to do this research: 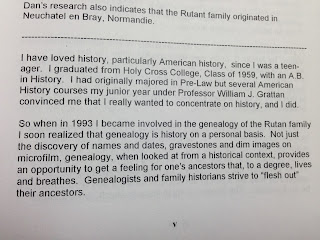 I want to tell more about the communication between Jim, Nick and myself. Irene Rutan Kittle, my grandmother and Nick's, died very young at age 43 of a kidney ailment.  Jim said his grandmother (Dad's Aunt Hattie) was such a very loving person in his life. I wish I had known Irene (Renie to her friends and family) so here's a photo of her standing at left, with sister Hattie at right, near a canoe in which my grandfather is sitting... 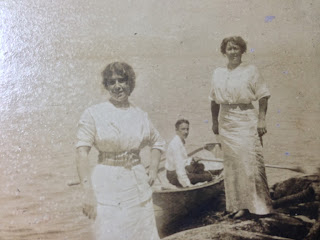 The three sisters, once married, all lived near one another in Brooklyn in those years, and then went in the summers with their kids to a bungalow in the Rockaways for relief from the hot summers in Brooklyn. Here is a sweet picture of my father and his little sisters sitting on those bungalow steps... 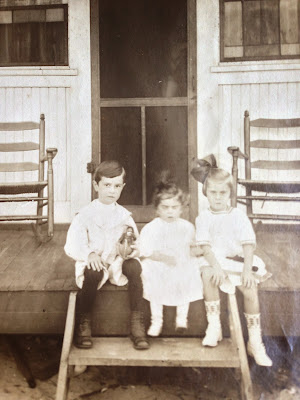 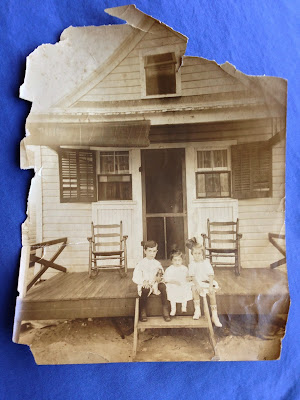 And here are a bunch of the cousins standing on the beach one day, looking very much like kids now... 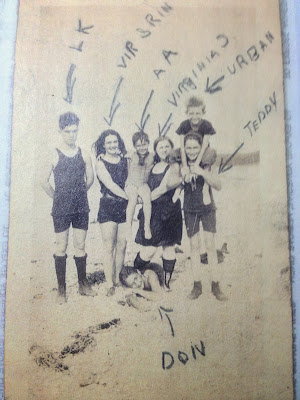 The one on the left is my father, the young lady standing next to him is his cousin, Virginia Skinner, Jim Keegan's mother, and the others are also cousins, all there on the Rockaway beach.

There was a film about the Rockaway bungalows that aired on PBS a few years ago:"The Bungalows of Rockaway, An Independent Documentary" which had  footage and photos from many years back, and revealed the fact that there are a group of people living there now in the relatively small number of  bungalows that remain. They have successfully fought to maintain them as worthy of preservation.

To view the trailer for the documentary, see this link:

I wish I could have met your Nana! I love how you two grew on each other through the years. It makes the relationship even more special somehow. The brown shoe/black shoe story is so great, what a terrific way to discover each other's mutual sense of humor! The spoon and the booties, one blue one pink...adorable.