"Everything and their opposite" is a phrase found in a letter from my uncle, Louis Kamp (Louie.)

It was something his wife, my aunt Renie (my father's sister, Irene Kittle Kamp) used to frequently refer to...this I discovered in that letter from Louie, Louie himself having depths of interest in science and other adventurous speculations, of which I have many examples noted in letters over the years. Louie was also a very funny guy and an artist. At one time, when I was a still pretty young, Renie was Editor of Seventeen Magazine, something I thought quite glamorous. During this time they lived in an apartment in New York City but had a summer place in Hampton Bays out in Long Island. My parents and my sister and I would sometimes drive out from where we lived in Merrick to visit them there, and it was on one of those visits, probably one August, when we were all sitting outside under a fabulous array of stars. And Louie said at one point, "One of those stars might be an atom in Bobo's leg" (Bobo being my cousin, who was a couple of years younger than me.) I was very struck by this comment, something that still seems fascinating, and especially, I liked hearing this in a setting that included me, as a child. This was around early 1950s. Many years later,  when Louie was nearing age 90, he sent me a wonderful book, The Holographic Universe, by Michael Talbot, which seemed then and seems now linked in its essence with Louie's years-back comment. I am going to add Louie's letter to this post, will photograph it and then post it. It's quite nice to read, and is interesting visually too....meanwhile, more about Louie and Renie and their interesting house and point of view:

As an artist back then, Louis fashioned small "constructions" out of discarded bits of wood into sailboats that he roughly nailed together, painted in a monochromed color, and affixed over the doorways here and there. These I liked very much. He and Renie also had pages from The Old Man and The Sea, some particular bit of text they must have loved, which he had photostatted, enlarged and made into wallpaper in one of the rooms: white letters on dark blue background.

Renie and Louie were unique in our family...they were both writers, had been writing partners during the 1940s and 50s, doing short stories for the Saturday Evening Post, and later writing screenplays together (The Sandpiper and The Lion among others.) They both also wrote plays. Renie's play, The Great Indoors, "had a brief Broadway run in 1966", as noted in her obituary.

As with many writers, their letters are full of interest, kind of like a flowing autobiography. They moved many years back to Los Angeles so we didn't see them that often, but kept in touch via letters and occasional phone calls. 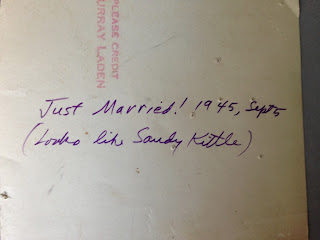 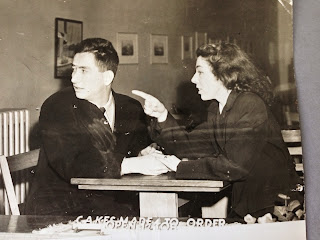 I am going to include shortly some excerpts of letters they'd sent over the years, and more photos, but first would like to tell about a couple of my favorite fairy tales, because each is a case where opposites somehow conspire to make something happen.

Here's a synopsis of each:

Basically, this is a tale of a resourceful fellow, without appreciable means in life, who cleverly, as he walks along the road from one town to another, picks up a particularly smooth and rounded stone and puts it in his pocket. He approaches a village (one such as appears in many a fairy tale, set in the unspecified past.) He goes into a tavern across from the village green and has himself a nice beer or cider and gets to talking to the habitues there and gradually gets around to telling them of a magic stone he has in his pocket that is able to make soup! They are intrigued and yet doubtful and jesting about it, and he ends up challenging them to a testing of the soup stone's powers. They agree. He tells them all is needed is a fire built opposite the tavern in a clear place on the green, and a large caldron. This is done, and the water soon is boiling in the caldron. He suggests they amuse themselves with telling stories while the soup magic happens. And then he says, does anyone have an onion by chance?  And the tavern owner's wife says yes, here's an onion...and then someone else who has her shopping basket with her offers a potato or two, and someone else has a few herbs handy...and then another person says, well, here's a hambone I just picked up at the market...and as they were all drinking the beer and the cider, merriment prevailed and the smell of the onions and herbs and ham were most appealing...suddenly...it was soup!  And all partook of it and raved about it...and said to the guy, where on earth did you get this magic stone...and he said oh, it's so wonderful, I'm so lucky to have it...and they began to try to persuade him to part with it, eventually, offering him money for it.  and eventually, he agreed, acting as though he regretted it, but they were so persuasive, etc. They all gave him a cheer when he went to leave, and as he walked down the road, with a full stomach, he noted a nice looking stone by the side of the road, picked it up, dusted it off, and put it in his pocket as he wended his way to the next little village, with a few coins jingling in his pocket for perhaps an overnight stay in a nice little inn.

To summarize: First there is nothing. Then something materializes.

A cover of one of the Grimm's Fairy Tales editions: 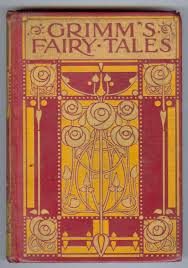 This next one was written by Oscar Wilde...

This story is set in a European city of great beauty, wherein a lovely gold statue of a prince graces the public square, a young man whose eyes are gemstones...and of which the townspeople and the mayor are inordinately proud. A sweet-natured bird, a swallow, comes often to sit with the statue, sheltering in its nooks and crannies against the wind sometimes, and she comes to know and talk with the prince. She tells him stories of the town, some of them sad, people who are hungry, a poet writing in a little garret, things like that. And he feels similarly as she, that something should be done for these people. Suddenly he gets the idea that she can take some of the gold leaf from his garments and bring them to the unfortunate people she has noticed. She does so, and comes back and exclaims at how happy, how relieved the people were in every case at the unexpected bounty. Finally, the gold is all gone from his being, and only the lead remains. There are still the gemstones in his eyes, and these too he persuades her to carry off to those in need. Finally, all is dark and she still sits with him...and the mayor comes forth and sees the dreariness of the statue, and says to his retinue to go and carry the now undistinguished statue to the smelter to be melted down (and probably to be replaced with another resplendent figure.) And as they carry the prince away, the swallow goes with him...and when all is melted, there is something unmeltable left in the ashes...a heart.

I just love this story...this above is my own recollection of it, there may be some details I have not remembered correctly, but the essence is there.

Here's an illustration from the book: 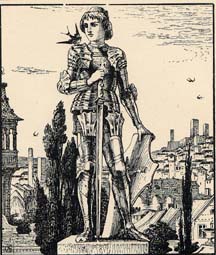 Illustration for the first edition by Walter Crane

Here again: a "something", which due to a wonderful kind of goodness, became nothing, and then morphed into a much bigger something.

Awhile ago I heard about a book which sounded intriguing and ordered it from Amazon: Moby-Duck: The True Story of 28,800 Bath Toys Lost at Sea and of the Beachcombers, Oceanographers, Environmentalists, and Fools, Including the Author, Who Went in Search of Them, written by Donovan Hohn. It is a case where the rubber ducks were set loose from a container ship (not on purpose) and as they were fellow creatures of a common design, they grouped together inexorably and formed a giant phalanx of sweetness and unexpected majesty and traveled resolutely around the world's seas. I had also  heard of a similar floating mass of garbage (or for a nicer term, flotsam and jetsam), much of it composed also of plastics, which was abroad on the ocean and traveling day and night with no particular destination. Its formal name is the Great Pacific Garbage Patch. Each bit of the garbage not much by itself, but together it was/is massive and very much itself.

A last bit of detail from my own world-view: I have noticed when doing laundry that garments of a similar fabric sometimes gather together in the dryer, as though old friends refound...sox in particular seem to like to do this.

Some excerpts of letters from Renie and Louie will be added here soon...


Posted by Alexandra Sellon at 9:32 PM

I love that Oscar Wilde story! And the the one about the stone- wonderful, both of them. Another terrific post. Renie and Louie Kamp are made so vital through your writing. The "an atom in Bobo's leg"; I heard something similar recently from Neil Degrasse Tyson, Louis was ahead of his time. I would like to read Renie's "The Great Indoors" if you have a copy!