I've been wanting to go back to the subject of my Aunt Connie working for Adventure magazine back in the early 1930s. That post was titled My Aunt Connie and Adventure Magazine. There are some more bits of memorabilia in the form of letters and things Connie had saved that I want to add here shortly, but first, a nice comment made on the post back in September:

I've been collecting and reading Adventure magazine for 40 years and I hope you will continue to write about your aunt.

I loved the memo concerning lateness at the office. Reminds me of my years as a manager. I must have sent a hundred memos warning employees. I was amused to see that Adventure had the same problem.

At the time, I wanted to email a response to Mr. Martin but didn't have his email address. I searched online and found he'd given the keynote address at a yearly event  in Columbus, Ohio called "Pulp Fest", his report on the convention appearing in a blog called Mystery*File, written by Steve Lewis.

I contacted Steve to ask for Walker Martin's address, and told him that I had a great love of mysteries myself and would send him a list of my own favorites, honed over years of reading on trains and buses and in the wee hours of the night. I explained that I was fussy about the ones I read, in that I didn't like the Scandinavian ones of disturbing content yet also didn't  like the too-ordinary cozies either, only those with wonderful good writing and settings.
.
He gave me Walker's email address and replied, about the nature of mysteries:

I think I'm solidly with you as to mystery reading: I don't like excessive violence either, nor the present crop of cozies, which are far too bland for me.  Something in between would be good, but there doesn't seem to be nearly enough of those!

So I have just sent both Steve and Walker this list of my own favorite mystery writers:


Here also are a few notes about my "favorites":


They all have as a great asset, a most important feature: a true atmosphere bespeaking a particular and interesting geographic area. In the case of the English and Scottish ones, as one who has not in fact traveled to any great extent, I somehow feel I have done so by virtue of my frequent virtual trips via wonderful mysteries.


The books by Catriona McPherson, Alan Bradley, Jonathan Nash, Susan Elia Macneal, Deborah Crombie, Nancy Atherton, Iain Pears, Martha Grimes, Simon Brett, and J. J. Fiechter are all set in the British Isles, though not necessarily all are American writers. Donna Leon's collection of books are all set in Venice. I love the Lovejoy books by Jonathan Nash, have old copies of them which I reread from time to time...they have the added blessing of tons of information about antiques and the aliveness of them, as Lovejoy perceives them, with whole pages of fascinating information about how to forge a magnficent painting (making the pigments oneself!), how to create a silver tray by hammering designs into it, how to forge a pearl! One of Donna Leon's goes into the process of glass blowing on Murano. Alan Bradley's main character, Flavia De Luce, is a child prodigy who has great knowledge of chemicals and forensics, so to speak. I really love all the books from these authors...


A final word about Rhys Bowen. She is Welsh and has several series, each quite different from the others. The Molly Murphy ones include Hush Now, Don't You Cry; then there are the Constable Evans ones set in Wales, and the more recent series, Royal Spyness, which provide much great pleasure in reading about Lady Georgiana, who describes the terrible heat in London and riding the subway, and says: "You may be wondering whether members of the royal family frequently ride on the underground. The answer, of course, is no. My austere relatives King George V and Queen Mary would have only the vaguest idea of what the tube train was. Of course I am only thirty-fourth in line to the throne, and I am probably the only member of my family who was at that moment penniless and trying to survive on her own, in London..." (Note that among the many familiar and unfamiliar characters which appear in these books include the Duke and Duchess of Windsor during the years when they were extremely controversial.) These are very enjoyable books!

Here is a photo of my "collection" arranged on an old harpsichord in the living room (it does not play, some strings are broken, but is lovely to look at, and a fitting housing for such nice books!) 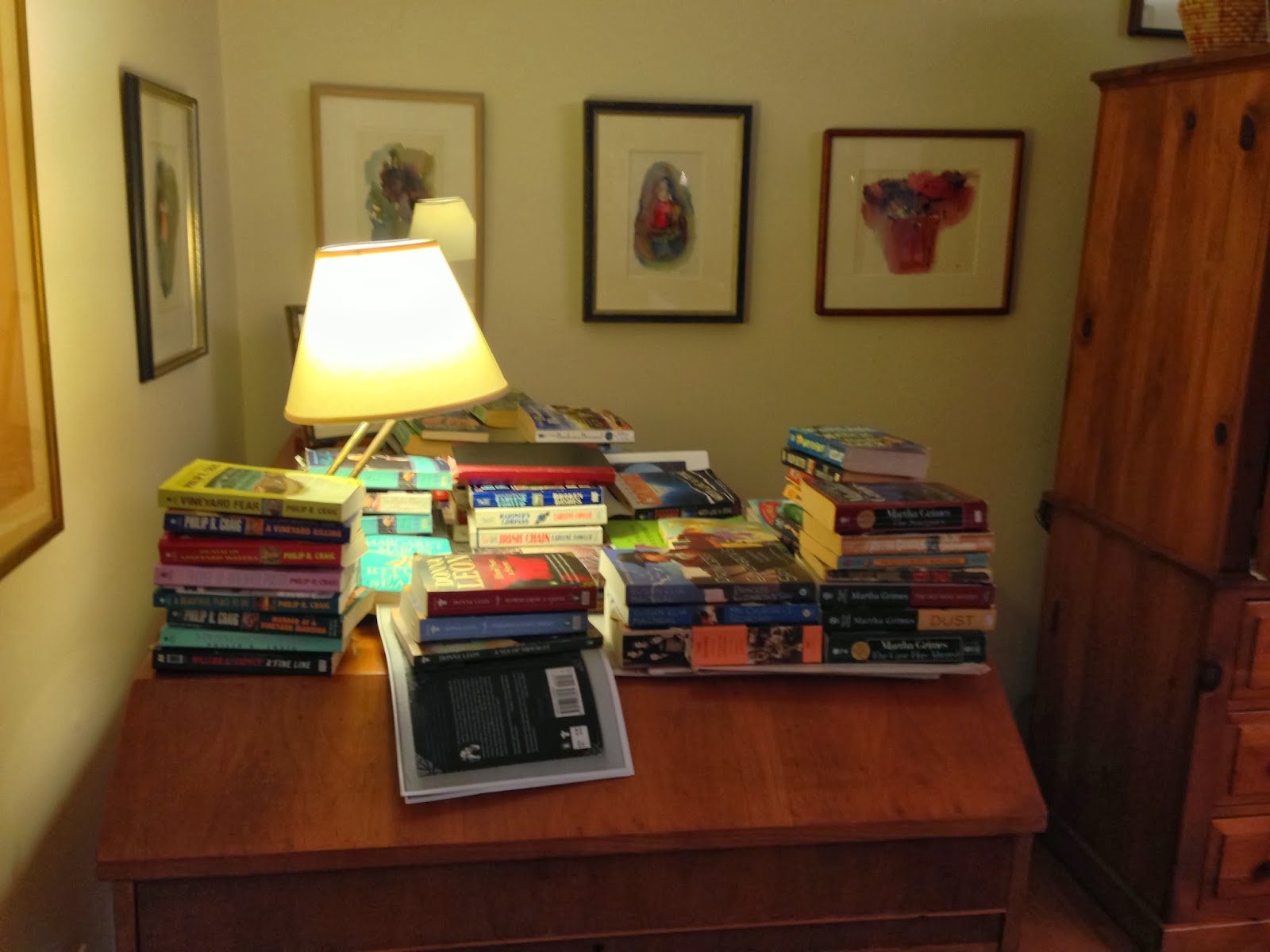 More of my aunt Connie's "archives" will be coming here soon...

And also re: Adventure: here is an updated website address for the Adventure cover artist, Earl Mayan:

Earl Mayan was also an illustrator for Saturday Evening Post, was a writer, poet and painter, and taught for many years at New York's Art Students League. On the website is a fascinating page showing how he used himself (as well as his wife Jean) as model for many of the Adventure and Saturday Evening Post illustrations...you can view the photographs and then the subsequent illustrations.

Posted by Alexandra Sellon at 2:54 PM

Love hearing about your Aunt Connie and Adventure Magazine. I wish they had something similar (with those great illustrations) today. I'm copying and pasting this list of mystery writers (and books) and am going to order some on Amazon. Nothing I love more than book recommendations! Great post!

I was the person who found your blog post about your Aunt Connie and Adventure magazine, and posted it on my blog Pulp Flakes. I'm looking forward to the next post on her.