This is part four of what I'd begun writing in the posts about Milton Feher, Pauline Tish, and Harold Pessorilo...all proponents of the way man walks (or dances) on the earth...Patricia Norris is both dancer and expert in body alignment.

Patricia Norris was formerly Patsy Shibley, one of the two teachers at a very fine school of ballet in Long Island in the 1940s.

The founder of the school was Patsy's mother, Jeanne Shibley, an elegant blonde woman who taught ballet in the classical mode, even for the smallest children. She was able to demonstrate for us an incredible arched foot, the sight of which still resonates with me.  The Shibley School was in a small sunny studio in Freeport, N.Y., a town right next to ours on the south shore of Long Island. When she taught she wore, of course, the traditional leather Capezios, and a lovely long cotton quilted skirt (this I just remember suddenly) which was black and many colors pieced together. We'd started classes there when World War II was coming to a close, and the reason we were there was that a pediatrician had told my mother that my older sister had a problem with her feet, and that it could be remedied with ballet classes . My mother taught 5th grade in a school in Queens, New York, for many years, and always loved ballet and was pleasantly surprised to find a school had opened right near us in Freeport, NY, but to find one of such exceptional quality was, I guess, unexpected, and it went on to become a great part of our lives.

For one thing, my sister Cynthia, was found to have a great talent for ballet and applied herself very seriously to practicing at home every day. I was the more casual one about it until later. But each of us took part every year in June at the recital held in a local high school. The nature of the choreography, the costumes (the traditional tutus of ballet companies, handsewn by a marvelous costuming seamstress that Jeanne knew), and the lighting, all were in marvelous taste, and all came to the fore for me years later when I was at Pratt and in Pauline Tish's dance workshops.

Patsy, Jeanne's daughter, was a wonderful choreographer. She and Jeanne together evolved the production of the "white ballet" which culminated the recital every year, in which all the students participated. But Patsy also designed dances for all the smaller bits, where a solo was done, or a dance of three students, or six...and whatever the smaller dances were, they were framed around those particular students, coming out of their very natures, suited to their capabilities...so that nothing was standard and all was much more individually wrought.

Patsy was very petite, with a shining cap of black hair and beautiful eyes, and a wonderful dancer herself. When my sister and I both were in Mepham high school and there was a yearly event, (the "Pop Concert" it was called), we were always part of the many acts that performed. Every year my mother would ask Patsy to design us each a dance to whatever music Mr. Pritchard, the music director at the school suggested. He taught instruments and got those kids together every year into a great band that would play all the music at the Pop Concert. (When I watch School of Rock with Jack Black, I often think of how good Mepham's band was!) So we would bring the record of the piece over to Patsy and she would work with us, listening to the music together, starting a few steps, and then go on to knit, as it were, a dance. And when the performance would be done, it would be that same piece on the record but played live by the band. Of course there would be rehearsals, and dress rehearsals to iron out any rough spots, but I found it to be absolutely invigorating to dance to live music on a stage with a willing audience out there. This so different from my childhood years, when being on a stage for any reason was uncomfortable and embarrassing!  Patsy's choreography was great: one year, my dance was to Leonard Bernstein's New York, New York, "New York, New York, a helluva town. The Bronx is up but the Battery's down."

A picture from that performance appears below... 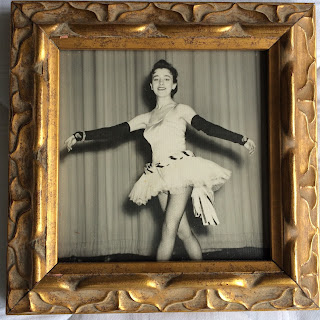 Recently, I was thinking about Patsy and Jeanne and decided to look on the computer and see if I could find something about Patsy's life now...I knew that she had moved to England years ago, but here follows some of the interesting information I discovered about her work there, and her books, one of which I have ordered and received with great pleasure via Amazon...

Posted by Alexandra Sellon at 11:16 AM