And lastly, a fifth person who also spent a lifetime working on man's movement upon the earth, this time with her deep knowledge of the Chinese method called T'ai Chi Ch'uan.

In the paragraph below from her book, Sophia talks about the Western versus Eastern approach to physical activity:

"We in the West are apt to overdo in exercises and sports, believing that a hard, tense movement indicates strength and that power comes from the ability to expend energy violently. With T'ai Chi Ch'uan, energy can be controlled, strength balanced, vitality stabilized by using the body in such a way as not to strain the muscles, not to overactivate the heart, not to exert oneself excessively."

The book is Body & Mind in Harmony - T'ai Chi Ch'uan - An Ancient Chinese Way to Exercise to Achieve Health & Tranquility, which was published in 1961 by Cornerstone Library Publications, Simon & Schuster.

Pictures of the front and back covers of Body & Mind in Harmony - T'ai Chi Ch'uan: 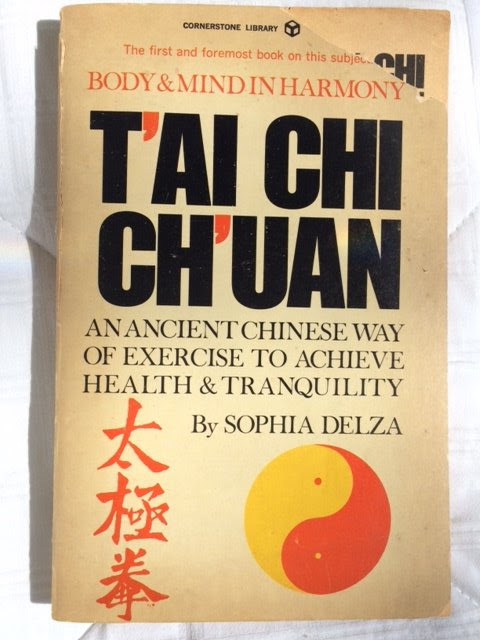 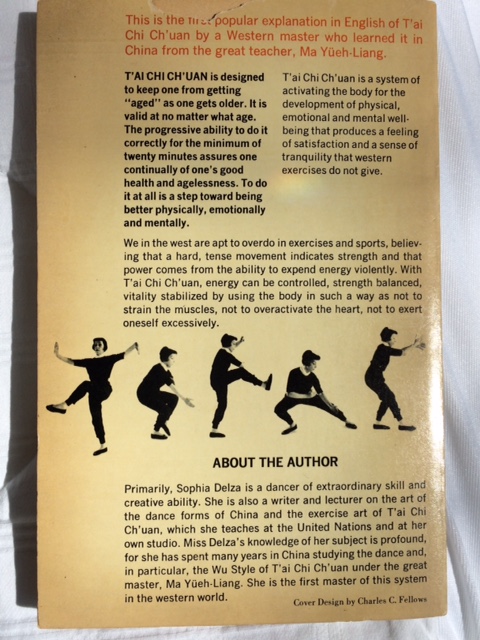 I feel very lucky to have been a student in her classes in one of the studios at Carnegie Hall back in the 1960s. Here follows something about the classes, about her teaching, and the poetic nature of the 108 "forms" (or separate movements, each with their own choreography, so to speak) of T'ai Chi Ch'uan. She taught the Wu Style, the longer of the two styles of T'ai Chi Ch'uan (the other being the Yang Style.) Reading the paragraph above makes me wish I could find a T'ai Chi teacher here in Connecticut (specifically the Wu Style, which is the one I learned back then, and could presumably re-learn.) I've not kept up doing it, having some knee problems which may make it more difficult, as most of it is done with slightly bent knees. But it was and is a wonderful creation by ancient and brilliant people. Sophia had learned to do T'ai Chi in China from a master of the Wu Style, Ma Yueh-Liang, when she and her husband, A. Cook Glassgold, spent a goodly amount of time in China many years back.

I want to post some of the drawings (which I believe are her own ink drawings) that accompany her descriptions of each of the 108 forms of the Wu Style (another reason why I believe I can return to its practice, referring to her words as well as her drawings, for each of the forms...so long as my knees will cooperate!)  Also, I would like to mention something about the nature-imagery that is associated with each of the forms, such as one that I always liked, "Cloud Arms". There's so much wonderful writing she has done to explain the very nature of T'ai Chi, such as the following, one of the introductory chapters:
"The action and the person appear to be completely relaxed, because the activity is hidden inside, below the surface. The continuous flow of movement into movement, without straining, also contributes to this outer "soft" appearance. Actually, all the movements are done with controlled inner force. It is not the extent to which movement can go that matters; rather it is the quality in reserve that determines its softness, which means 'intrinsic-stored-up-within'. With this soft technique the body can be held loosely and circulation is, therefore, unrestricted."

Here is the obituary from the New York Times:

Sophia Delza Glassgold, a modern dancer and teacher and an expert in the ancient Chinese exercise form called tai chi, died on June 27 at Beth Israel Medical Center in Manhattan.

She was 92 and lived in Manhattan.
A graduate of Hunter College, she trained as a modern dancer and toured the United States performing Spanish and modern dance during the 1920's.
She also performed with her sister, Elizabeth, in the late 1920's at the Neighborhood Playhouse.
She lived in Shanghai from 1948 to 1951 and was the first American dancer to teach modern dance in Chinese theater and dance schools.
Ms. Delza also became an expert on Chinese theatrical dancing after studying action dance roles in the classical Chinese theater with Wang Fu-Ying and Cheng Chuan-Chien. She gave lectures and dance recitals on the material throughout the United States.
She founded the Delza School of Tai Chi Chuan at Carnegie Hall in 1954 and later taught at schools including the State University of New York at Purchase, the Actor's Studio and the University of Hawaii.
She also taught and lectured on tai chi in live appearances and on television, writing the first book in English on the subject.
Her writings on esthetics, dance and theater arts and exercise and health have been published in China, in Europe and in American journals that include Dance Observer, the Theater Drama Review and the Journal of Aesthetics and Art Criticism.
Ms. Delza also published a record album on teaching tai chi and wrote four books on tai chi and modern dance, including "The Tai Chi Chuan Experience," published this year by the State University of New York Press.
Ms. Delza's husband, A. Cook Glassgold, an official of the Joint Distribution Committee in Shanghai and the United Nations Relief and Rehabilitation Agency, died in 1985.
She is survived by her sister, of Manhattan.