I’ve recently been to a favorite shoe store in in pursuit of two things, two (perhaps) mutually exclusive things:

I met some of each of these on a recent visit to Harry’s Shoes on Broadway in New York City, first trying on many #1 type shoes, some similar to what used to be called “Space Shoes” in the 1960s. Some could only be called charming if one couldn’t see them, and only feel them, comfortably surrounding the feet like a sleeping bag.  But then I saw something else, placed before me by the nice Harry’s saleswoman who’d helped me a year or so ago. In her proffering this shoe I found her both compassionate (she somehow knew my fantasy shoe wish) but also subversive as she helped me place my usually horizontal foot into a vertical mode supported by a lovely concoction of wood, leather and a sweetly placed black chiffon bow at the ankle. And this, placed upon my foot, made to disappear every other shoe in the joint.

The problem was (and is), I could not stand up in this shoe, and of course, the financial aspect was also considerable, but that aside, I knew it would be absurd and wrong to buy them. Most likely I would not be able to walk in them, might even have to be helped from room to room while wearing them! Still I loved the idea of them as a talisman, as a charm.

I somehow clamored for them, hearing some kind of call from a distant shore (my youth?) Having the phone in my pocketbook with camera, I asked if my fairy godmother could perhaps take a photo of me wearing the shoe. Several pictures were taken of me sitting on the little couch laughing, with a sneaker on one foot and its majestic mate on the other.

I am trying to remember other artifacts in my life that held a similar lure and equivocal magic that I was destined to respond to with “no regrets even if there is a little remorse” * , and is there any way I can use these other artifacts to justify this purchase?.

But it happened that no such purchase took place, and hence: no remorse and no regret. (It is nice to have a picture of the shoe, nonetheless.) 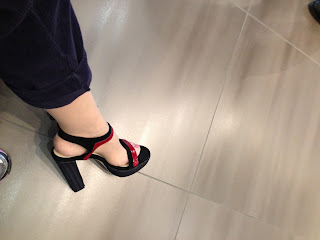 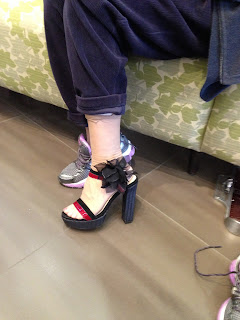 Posted by Alexandra Sellon at 9:16 AM

Love this! Everybody should have one pair of high heels that are really special :)

Shoes are a part of my life! I remember shoes I had, and didn't have, 50 years ago!

Buying a beautiful pair of Spring Sandals is the best way to celebrate our long awaited Spring in New York!